Everything You Need To Know About the Maggi Controversy 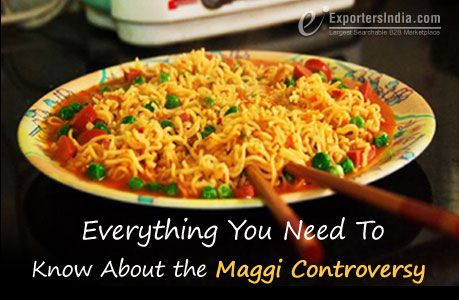 Even amidst the huge diversity of cuisines in India, if there is one dish that can be termed as India's National Food, it would undoubtedly be Maggi Noodles. A quick fix for hunger, the two-minute noodles by Nestle is consumed in almost every household. Be it between tea breaks for working people or the hostellers' midnight munchies, Maggi could be gorged upon at all hours. But not anymore folks! Your beloved noodles have been picked up from the stores to be tested against presence of harmful ingredients like lead and monosodium glutamate (MSG).

When & Where it all began?
The controversy began last month when the Lucknow Food Safety and Drug Administration conducted checks on Maggi samples and found the presence of lead and MSG in amounts way beyond the permissible limit. On May 16th the FDA started probing the matter and also wrote to the Food Safety and Standards Authority of India (FSSAI) asking to revoke the company's license. While this matter came to the limelight in media after this incidence, its roadmap was laid around 15 months back in March 2014 when V K Pandey - district food officer in Barabanki conducted a routine check and lifted samples of Maggi from local retailers. Upon testing, the Government Regional Public Analyst Laboratory in Gorakhpur found substantial amounts of MSG in them. Nestle was issued a notice, asking whether it wanted to appeal, and in July the company did. Samples were sent to Central Food Laboratory, Kolkata where it was reconfirmed that Maggi contained excessive amount of lead and MSG.

How do Lead and MSG pose a threat to our health?

What may be the legal proceedings on Maggi in India?
While Nestle India continues to assert that no MSG is used in its product and lead amounts are also kept within the limits, food safety inspectors from UP have filed a criminal complaint against the company. Delhi, Haryana, Bihar, Goa, Maharashtra, Karnataka and Kerala have also banned Maggi (for the time being) and sent the samples for testing. Results from laboratories expected to be out in the next 14 days will determine whether or not they will file a case against the company.

Why Maggi tastes bitter to Bollywood Stars?
Concurrently, voices from the civil society and law-enforcement authorities are also demanding criminal cases to be filed against Bollywood starts Amitabh Bachchan,Madhuri Dixit and Preity Zinta - brand ambassadors for Maggi. Although celebrities keep them safe by mentioning special clause in legal agreements but such claims must be giving them sleepless nights. Meanwhile, you should keep the already-purchased Maggi packets away from the kitchen shelf, at least till the lab results declare it safe. If proven unsafe, the government may ban the product and prosecute the company. On your part, it would be unwise to keep on loving someone who is only hurting you.