Farm Power Driven 90% by Machines, 5% by Humans and 5% by Draught Animals

A research conducted at Central Institute of Agricultural Engineering, Bhopal by principal scientist, CR Mehta, and his colleagues, has unveiled a startling fact about a gradual but significant shift in India's agricultural practices. The research concludes that 90% of farm power is drawn from mechanical resources, while the share of human power has dropped down to 5%. The remaining 5% is shared by draught animals -- the archetypical oxen used for tilling or threshing rains. 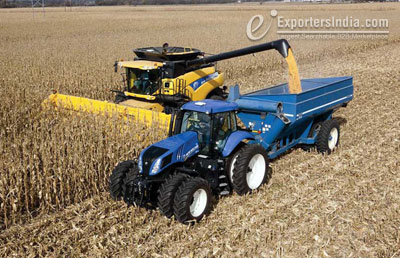 Earlier, the agricultural practices involved more of human and animal power, which began to decline once the Green Revolution gained momentum. The report by CR Mehta pointed out that during 1971-72, the two animate power sources collectively accounted for 60% of the share, which fell down further to 26% in 1991-92. Today, humans and draught animals have been replaced by farm machinery and implements like tractors, power tillers, electric motors and diesel engines.

Major Sources of Mechanical Power
Out of the 90% power derived from mechanical sources, the biggest share of the pie is with tractors and tillers that account for 47%, followed by 27% of electrical motors and 16% of diesel engines. The most startling rise in power contribution has been made by tractors and tillers -- from 7 to 47%.

How Power Contribution Was Measured?
The average power generated by humans, animals and machines per unit of farmland was calculated in kilowatts and used for estimating the aforementioned figures. For instance, a human being, at an average produces 0.15 kilowatts of power per hectare, while a tractor yields 30.21 kilowatts for the same area. However, it must be noted that these figures show the amount of power generated, instead of what has been utilized.

But Does this Imply Increase in Farm Mechanization?
We cannot deny that farm mechanization has gone up in the last few decades, but it has only reached the mark of 40%, falling much behind the 95% of developed nations. This means that humans and draught animals do about 60% of the total work in farming, but only 10% power is produced from their activities -- surely no good news 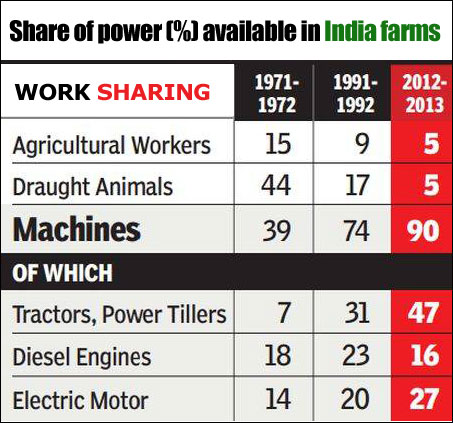 For the agriculture sector. Some more numbers that will astound you are mentioned here

Your common sense would tell you that if farm mechanization has increased, the number of farm laborers should have gone down. But clearly the situation is different from what ought to have been. Why? Because these people are not able to find employment in any other sector and thusly, they are 'disguisedly unemployed' in agriculture. The report brought forth by scientists from Bhopal seemed to connote a positive change in the agricultural industry, but subsequently it threw light upon contradictory figures pointing to an alarming situation. Significant steps are required to create alternative employment avenues, improve the quality of operations with non-mechanical sources of power while simultaneously encouraging mechanization. Only then can we hope to realize India's agricultural potential in its entirety.