Piplantri: A Village that Plants 111 Trees for Every Newborn Girl

In a country where many households still mourn the birth of a girl child, Piplantri village in Rajasthan has a different story to tell. Not only are daughters adorned here but the village plants 111 trees for every girl born. This tradition is a silver lining for a state where the sex ratio has constantly been on a decline, currently standing at 888 females per 1,000 males. While working as an antidote for gender biases, this practice also promotes the green cover, owing to which more than a quarter million trees have been planted in the region till now.

About the tradition
This noble ritual was initiated in 2006 by Shri Shyam Sundar Paliwal - the former village head - in the memory of his daughter, who passed away at a young age. 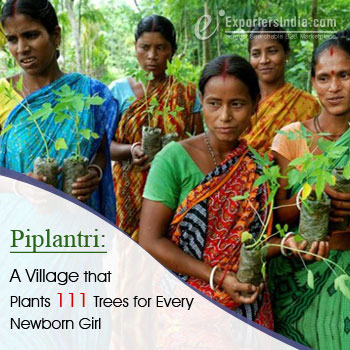 Whenever a girl is born, the family and the rest of the villagers collectively plant 111 trees as a celebration, and both are raised with equal respect. Just like they protect their girls from all the hardships of life, trees are also given protection from termite by planting aloe vera around them.

Furthermore, to provide financial security, a sum of Rs. 21,000 is contributed by the villagers and Rs. 10,000 is given by the family for every girl and kept as a fixed deposit which can be liquidated once she turns 20. In return, the parents are asked to sign a legal affidavit, which makes it mandatory for them to educate her, and prohibits them from marrying her off before the age of 18. This move also tries to demolish the notion of girls being a burden on their parents.

Community gets its reward too
The tradition which has been rightly termed as an 'eco-feminist' practice has many other facets. The trees planted include Neem, Mango, Amla, and Sheesham, which has increased groundwater levels in the region. These along with aloe vera planted around them have become a source of income for the village. Several aloe vera products are sold in the market under the brand name of Piplantri. To top it all, the villagers claim that this tradition has brought immense harmony amongst them, and in the last 7-8 years, not a single police case has been registered.

Sex ratio in Rajasthan: The Bigger Picture
As per Census 2001, Rajasthan's sex ratio stood at 909 females per 1,000 males and dropped down to 888 in 2011. However, thanks to people like Shri Shyam Sundar Paliwal and the entire village of Piplantri which supported him that Rajsamand district, where the village lies, shows positive figures of 988 females per 1,000 males. This village has not only empowered women but has also set an example worth following for the entire country with its humanitarian and environmentalist approach, showing a new path towards sustainable growth for all. This heartening story can be an inspiration for many and must be told and retold across the world so that it reaches every person who considers girl child to be a liability.

Food Safety and Healthy Essential availability during Pandemic
How to combat the Covid -19 Outbreak Impact on Businesses In India And The World?
Adverse Impacts Of Corona Virus Pandemic On The Agricultural Industry
7 Delicious Sweets You Must Try This Holi
Top 10 Tips for a Skin-Friendly Holi 2020
View More