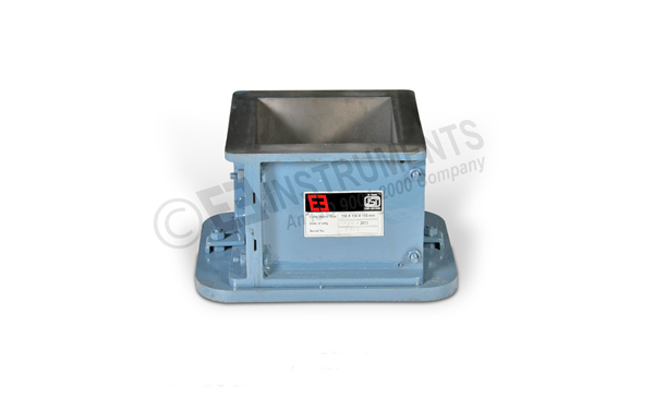 Cubes of fresh concrete are made to test a variety of properties on the eventually cured and hardened concrete. Fresh concrete is subjected to a standard compaction regime in the cube mould and is then normally initially cured under specific laboratory conditions. The moulds are manufactured, subject to tight dimensional, hardness, square ness and surface finish requirements.

Complete with base plate. The faces of the mould are machined flat to +/- 0.02mm accuracy and finished to within +/- 0.2mm of specified dimensions. Material for construction of moulds is Cast Iron or Mild steel. The moulds are stout enough to prevent distortion and facilitate the removal of the moulded specimen without damage. The Moulds are so machined that when they are assembled ready for use, the dimensions and internal faces are accurate within the specified limits. Internal faces of the moulds are smooth.

The base plate is attached to the mould by cleats .The parts of the mould, when assembled, are positively and rigidly held together during filling, subsequent handling and vibration where applicable.

SPANNER FOR DEMOULDING AND MOULDING,
TAMPING ROD WITH SAUQRE FACE.

As per IS : 10086-1982, The cube mould is so constructed so as to facilitate separation into two parts. The mass of the mould together with the base plate will be 2.8 +/- 0.2 kg. Material for construction of these moulds is mild steel.

For casting concrete specimens for flexural tests. The mould is made of 4 plates assembled together. Each mould with base plate, made of Mild Steel. Faced are machined flat to +/-0.2mm and finished in size to 0.2mm. AS PER IS: 516