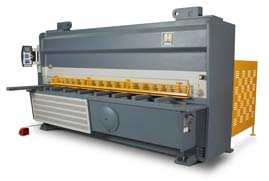 The HSL(X) Series Hydraulic Guillotine Shearing Machine are just like our TS shears guillotine type shears. This means that the cutting action is a scissors cutting action. The hydraulic cylinders on the HSLX shears are positioned directly above the ram and push the ram in a downwards direction.

Guillotine shears have several advantages above swingbeam type shears. They are made to cut several material types and thicknesses and have no twist in the frame like swingbeam types.

New Operator Control
On the HSLX models (sheet metal shearing machines), the beam rake angle and the blade gap setting are controlled by the new SC90 operator control. We adjust the rake angle on the HSLX guillotines by pumping more oil into, or releasing oil out of the right cylinder. To set the blade gap, we have 2 hydraulic cylinders which push the ram of the blade gap forward or backwards. The ram is guided between 4 spring loaded bearings.

Automatically Set Blade Gap Settings
With the new SC90 control, the rake angle and blade gap settings are set automatically by entering the material type and thickness of the sheet to be cut. The servo-driven backgauge on ball-screw in combination with the SC90 control, allows the operator to program different target positions for several cuts over one sheet and cut the sheets without any need to touch the operator control.

Hydraulic Controlled Hold-Downs
The sheet hold-downs on the HSLX guillotine models are hydraulic controlled. The hold-downs use a separate hydraulic circuit with separate pump. A pressure activated switch is used for the right pressure setting. The hold-downs on both sides of the shear are installed closer together to cut small plates. The HSLX guillotines come standard with a shadow light function, to be able cutting of plate, without the use of a backgauge.
hacowai8221.jpg

Light Guard System
All Haco guillotines are equipped with European Safety Specifications. To allow much easier and safer access to the rear of the guillotine and to prevent injury while cutting HACO applies an optical guard system. Our optional pneumatic thin sheet hold-up system is assuring the perfect gauging while entering the sheet into the machine as well as supporting during the cutting action. During the cutting action and when not in use, the arms rest under a cover, thus avoiding damaging the arms itself when cutting heavier material.

Heavy Dute Plate Hold-Up System
We also offer heavy duty conveyor and plate hold-up systems. The pneumatic plate hold-up arms hold the plate for perfect gauging. A strip of scrap can be cut and automatically removed to the scrap shute (Ex: when starting a series of cuts with a new plate). The conveyor transports the plates to a pallet or stacking system provided by the customer.