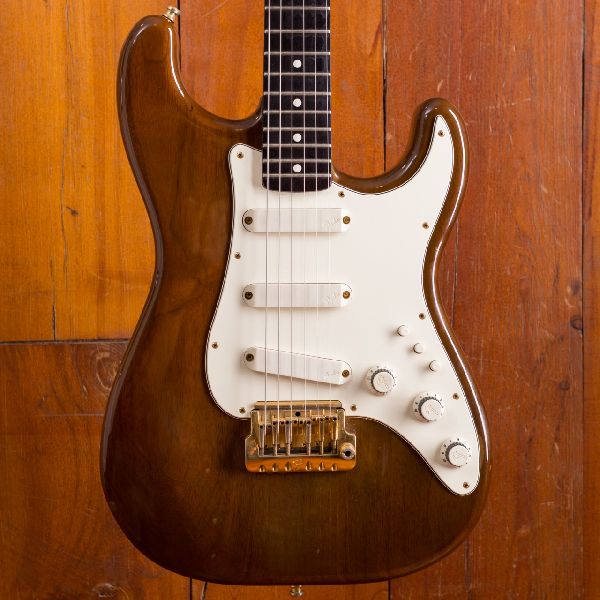 Product Description #E300065 Rare and unique vintae guitar from 1983. These Eilite Strats are the brain child of Dan Smith (father of current masterbuilder Dan Smith) who was hired by Fender to salvage the Fender name after their image good name and image was in free fall after the late seventies when Fender was really making substandard quality guitars which were heavy and really slapped together. The Elite Stratocaster was introduced in 1983 and discontinued in 1984. It served as a template for the Eric Clapton signature model of 1988. one of the players of the Elite model is Ty Tabor of King’s X, who used this guitar to record the first four albums of that band. Some of the Elite features have been incorporated into USA-made Fender guitars and basses made after the purchase of the Fender guitar company from CBS by Bill Schultz in 1985. For example, the Eric Clapton, Richie Sambora (introduced in 1991) and Buddy Guy (introduced in 1995) signature guitars retain the TBX/MDX design from the Elite. Features This guitar model featured an alder body, a maple neck featuring a rosewood fingerboard with 21 jumbo frets, 12″ radius, Schaller die-cast tuners with pearloid buttons, BiFlex truss-rod system with MicroTilt neck adjuster, Schaller Straplock Ready locking strap buttons, two hardened steel EasyGlider string trees, side-mount jack socket and a Freeflyte vibrato system, as well as three serrated “rubber insert”-style control knobs. The Freeflyte tremolo system differs significantly from previous Stratocaster tremolo designs. All routing is done from the front of the guitar. A cavity was created where the spring system would reside, and this connected to the bottom of the tremolo unit. The company saved money this way by performing a single, front-sided rout on the guitar to accommodate the pickups, the tremolo, the preamp and the controls. Other features included three special-design Alnico 5 single-coil pickups with solid covers and an internal dummy coil for hum cancellation, as well as three push-push buttons for pickup selection. Controls include a master volume, a TBX treble/bass expander and an active MDX midrange booster with 12 dB of gain. The sound of the Elite Stratocaster can be described as more humbucker-like compared to a traditional single coil-equipped guitar, especially with the TBX and MDX circuits at their maximum. A few Elite Stratocasters were manufactured with a standard 5-way switch and standard Strat knobs. Two such guitars which were custom built for Eric Clapton came with a traditional ’50s era-style maple neck and a hardtail non-tremolo bridge. Two other variants of the guitar were introduced in late 1983, the Gold Elite Stratocaster with gold plated hardware and the Walnut Elite Stratocaster featuring a solid walnut body and a stained ebony fingerboard.