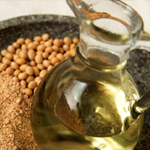 Soybean oil is the derivative of soybean. On crushing mature beans, 18% oil and 78-80% meal is obtained. While the oil is mainly used for human consumption, meal serves as the main source of protein in animal feeds. India is the World's largest importer of edible oils in the World. Of the total 5.0-5.5 million tons of vegetable oils imported, 1.3-1.5 million tons is soybean oil, imported mostly form Argentina,and followed by Brazil and US. In addition to imports, domestic production of around 0.7-0.8 million tons takes the annual soybean oil consumption of the country to 2.0-2.2 million tons, with a market value of Rs 8000 crore.