We offer a complete product range of Clove Stem and Cinnamon 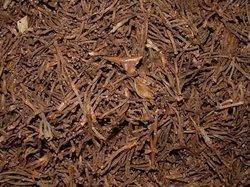 The clove tree is an evergreen that grows to about 8 to 12 m in height. Its gland-dotted leaves are small, simple and opposite. The trees are usually propagated from seeds that are planted in shaded areas. Flowering begins about the fifth year; a tree may annually yield up to 75 pounds (34 kg) of dried buds. The buds, just before the flowers open, are hand-picked in late summer and again in winter and are then sun-dried. The island of Zanzibar, which is part of Tanzania, is the world's largest producer of cloves. Madagascar and Indonesia are smaller producers. Cloves vary in length from about 12 to 34 inch (13 to 19 mm). Cloves contain 14 to 20 percent essential oil, the principal component of which is the aromatic oil eugenol (70 - 90%). Cloves are strongly pungent owing to eugenol, which is extracted by distillation to yield oil of cloves. Three essential oils are available from this spice: clove bud oil, clove stem oil and clove leaf oil. Each has different chemical composition and flavour. Clove bud oil, the most expensive and the best quality product, contains eugenol (80 - 90%), eugenol acetate (15%) and beta caryophyllene (5 - 12%). 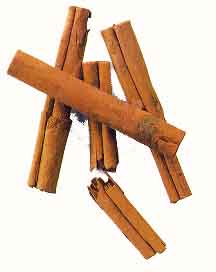 Cinnamon, a bushy evergreen tree of the laurel family (Lauraceae) is native to Sri Lanka (Ceylon), the neighbouring Malabar Coast of India, and Myanmar (Burma) and also cultivated in South America and the West Indies for the spice consisting of its dried inner bark. The spice is light brown in colour and has a delicately fragrant aroma and warm, sweet flavour. It is lighter in colour and milder in flavour than the other related species. Cinnamon was once more valuable than gold and has been associated with ancient rituals of sacrifice or pleasure. In Egypt, it was sought for embalming and witchcraft; in medieval Europe for religious rites and as flavouring. References to cinnamon are plenty throughout the Old Testament in the Bible. Later it was the most profitable spice in the Dutch East India Company trade. Botany Cinnamon is a bushy evergreen tree (6-8 m tall), cultivated as low bushes to ease the harvesting process. The leaves are long (10-18 cm), leathery and shining green on upper surface when mature. The flowers have a fetid, disagreeable smell. The fruit is a dark purple, one-seeded berry. It prefers shelter and moderate rainfall without extremes in temperature. Eight to ten lateral branches grow on each bush and after three years they are harvested. The Sri Lankan farmer harvests his main crop in the wet season, cutting the shoots close to the ground. In processing, the shoots are first scraped with a semicircular blade, then rubbed with a brass rid to loosen the bark, which is split with a knife and peeled. The peels are telescoped one into another forming a quill about 107 cm (42 inches) long and filled with trimming of the same quality bark to maintain the cylindrical shape. After four or five days of drying, the quills are rolled on a board to tighten the filling and then placed in subdued sunlight for further drying. Finally, they are bleached with sulphur dioxide and sorted into grades. Aroma and flavour Cinnamon contains from 0.5 to 1 present essential oil, the principal component of which is cinnamic aldehyde (about 60%). Other components are eugenol, eugenol acetate, and small amounts of aldehydes, ketones, alcohols, esters and terpenes. The oil is distilled from fragments for use in food, liqueur, perfume and drugs. The aldehyde can also be synthesized. Cinnamon leaf oil is unique in that it contains eugenol as its major constituent (70-90%). Culinary, medicinal and other use In modern times, cinnamon is used to flavour a variety of foods, from confections to curries; in Europe and the USA it is especially popular in bakery goods. The stick cinnamon is added whole to casseroles, rice dishes, mulled wines and punches, and to syrups for poaching fruit. The chips are also used in tea infusions or spiced cider blends. Ground cinnamon is used in baked goods like cakes, pasteries and biscuits. Cinnamon leaf oil is used in processed meats, condiments and also in bakery items. Oil from the bark is used in the manufacture of perfume. The cinnamic aldehyde and/or eugenol present are both antifungal agents. Cinnamon is a stimulant, astringent and carminative, used as an antidote for diarrhoea and stomach upsets.