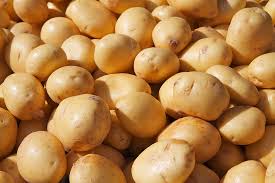 We are offering potatoes are generally grown from seed potatoes – these are tubers specifically grown to be disease free and provide consistent and healthy plants. To be disease free, the areas where seed potatoes are grown are selected with care. In the usa this restricts production of seed potatoes to only 15 states out of the 50 states that grow potatoes.these locations are selected for their cold hard winters that kill pests and long sunshine hours in the summer for optimum growth. In the uk, most seed potatoes originate in scotland in areas where westerly winds prevent aphid attack and thus prevent spread of potato virus pathogens. Potato growth has been divided into five phases. During the first phase, sprouts emerge from the seed potatoes and root growth begins. During the second, photosynthesis begins as the plant develops leaves and branches. In the third phase stolons develop from lower leaf axils on the stem and grow downwards into the ground and on these stolons new tubers develop as swellings of the stolon. This phase is often (but not always) associated with flowering. Tuber formation halts when soil temperatures reach 27 °c (81 °f); hence potatoes are considered a cool-season crop. Tuber bulking occurs during the fourth phase, when the plant begins investing the majority of its resources in its newly formed tubers. At this stage, several factors are critical to yield: optimal soil moisture and temperature, soil nutrient availability and balance, and resistance to pest attacks. The final phase is maturation: the plant canopy dies back, the tuber skins harden, and their sugars convert to starches.