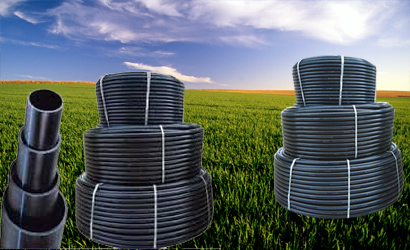 It is made of either of three grades of High Density Poly Ethylene polymers. i.e PE-63, PE-80 or PE-100.   PRODUCT RANGE :  These HDPE pipes are available in sizes 20 mm to 450 mm in pressure rating of PN-2.5, PN-4.0, PN-6.0, PN-8.0, PN-10.0 , PN-12.5 & PN-16.0 in all three grades PE-63, PE-80 and PE-100.     APPLICATIONS Effluent and Waste Water Disposal:  Effluents of varied chemical compositions can be effectively disposed of using  Om Optel  HDPE pipes & coils, with the aid of the latest know-how on piping engineering, pipelines for waste collection and disposal in chemical industry. Longevity of  Om Optel  pipes under such application would rate the best amongst the conventional pipe even under critical service conditions.   Domestic Gas Distributions :  Earlier, engineers always carried a psychological fear in using HDPE pipes rather plastic pipes for conveyance of inflammably gases. However experiments and extensive trials proved these fears totally wrong and have established excellence of performance of HDPE pipes for conveyance of all type of combustible gases. Experiments have also proved that the permeable losses are insignificant in regard to safety and environmental impact   Submarine Pipelines :  One of the most important applications where all salient features of  Om Optel  pipes prominently figure out is for under water pipelines.  Om Optel  pipes have been successfully laid for under water river crossing, creek crossing, marine out-falls and for brine intake lines in the open sea. Hazardous chemical effluents and radio active wastes are being harmlessly disposed into deep sea through Om Optel  pipes with substantial cost savings. Schemes which would have been dropped due to economical un-viability have been made feasible with  Om Optel  pipes.