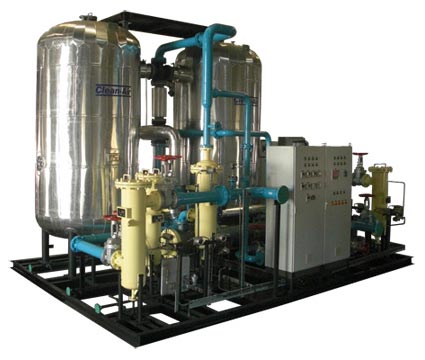 The wet air entering the dryer first comes in contact with the ceramic element of the Pre-Filter.Here solid impurity up to 5 microns and water droplets are effectively removed. Now, saturated wet air (free of contaminants) enters the distribution box which splits the air stream and diverts it partly to the heater for heating and partly for adsorption. The stream going for adsorption enters via the top four-way valve to the Adsorber tower, which is packed with desiccant. This Desiccant has a high surface area to porosity, which enables to hold large quantities of moisture from the compressed air. It also possesses the property of giving up this moisture on heating. Dry air leaving Adsorber from the bottom via the four-way valve enters the After Filter. The After Filter alike the Pre Filter has ceramic elements which prevents the desiccant dust carry-over into the system. Going back to the distributor box, the second stream leaving the distributor passes through the heater where it is heated to the reactivation temperature of 180 Deg C. This hot air leaving the heater passes through the tower to be reactivated via top four-way valve. On its way through the tower, it carries the moisture adsorbed by the Desiccant (in the previous cycle) and leaves the tower via the bottom four-way valve. Now, this wet air enters into the Reactivation cooler where it gets cooled to 40 Deg C and the moisture in the air condenses which is removed by the Moisture separator. This air stream again joins by the main stream through the distributor. Hence, in this process, there is no loss of compressed air. The change over of the Adsorber tower is accomplished by a linkage mechanism connecting the two four way valve shanks. A double acting pneumatic cylinder actuates this linkage. The timing of operation of this cylinder is controlled by a four-way solenoid valve, which in turn is controlled by the timer in the control panel. The air actuating the solenoid valve is first lubricated in an oil lubricator before entering the pneumatic cylinder. The air used for this purpose is dry air and is tapped from the after filter. Two limit switches control the travel of the linkage mechanism.