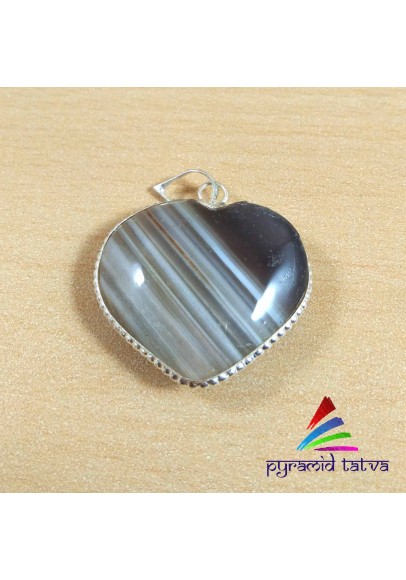 This listing is for only 1 Banded Agate Heart Pendant

Agate a mineral of the quartz family belongs to the Seeker and Transformer Crystals. Seeker and Transformers are popular talismans, used to find transformation in life towards more desirable state.  Seekers are used for guidance in searching for a new path, direction, approach or any quest which is desired but not attained yet.

Banded Agate is known as rainbow of earth with powers to heal mind, body and soul.. Agate is also called as protector stone and works as a barrier to deflect the negative and unwanted energies, including the physic attacks.

Owing its name to Achetes River in Sicily where Agates were first found, the concentric bands of Agate form in almost every color which earth can produce, even a colorless form. Agates are chosen by the vibrancy and interest in their designs and one need to connect with the same for best results. Banded Agate is widely used as a healing tool and helps in increasing concentration and memory. On physical level it is said to increase stamina and improve immune system. It is considered to be astrologically connected with zodiac signs of CAPRICORN and LIBRA