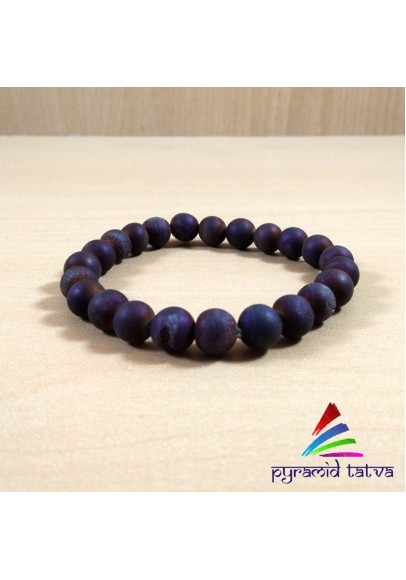 Druzy Agate Maroon Beads Bracelet Natural Gemstone Stone Beads Size - 8mm Chakra Balancing Crystal Healing Stone  Helps its wearer to relax, thereby reducing stress levels.
Druzy is known to hold the propensity to offer positive to its carrier that in turn provides calm to a tensed mind for making life stress free. It too draws out the pessimism from the inner aura of its carrier by infusing the positive inside as well as outside the carrier’s whole torso. It is further known to stabilize the aura that in turn provokes creativity in the pragmatic thinking.


The positive force of this gem jewel helps its carrier to develop the deep meditative state as well. It is further acknowledged to align all the imbalanced chakras of the torso. It is furthermore believed to keep its carrier physically, mentally as well as emotionally fit to vitalize the time of the prearranged life.It is further whispered to raise the physical, visual aspect, the emotional beauty of its carrier. Druzy is believed to rekindle the liveliness of its carrier to open the obstructions of the spirit which in turn help to seek the inner self. On a physical level, it is celebrated and worn to strengthen the immune as well as the circulatory system of the torso of its carrier.