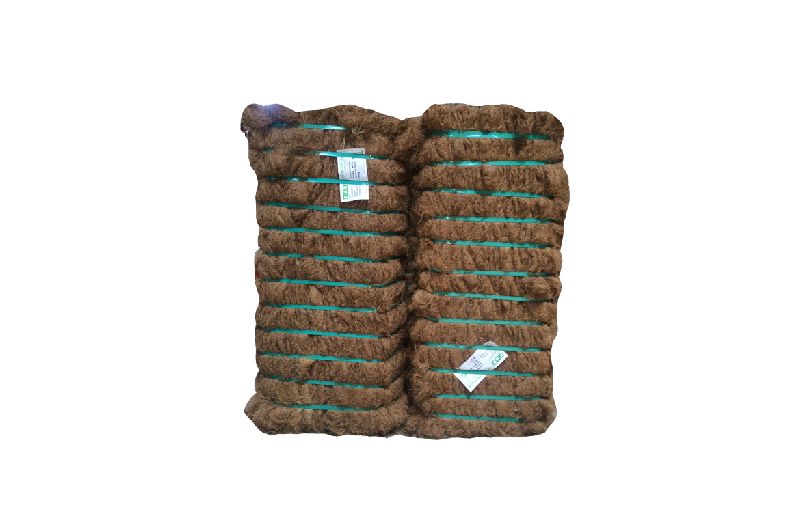 coir fibre is a natural fibre extracted from the husk of coconut and used in products such as floor mats, doormats, brushes, mattresses, etc. Coir fibre is the fibrous material found between the hard, internal shell and the outer coat of a coconut. Other uses of brown coir (made from ripe coconut) are in upholstery padding, sacking and horticulture. White coir, harvested from unripe coconuts, is used for making finer brushes, string, rope and fishing nets. coir fibres are found between the hard, internal shell and the outer coat of a coconut. The individual fibre cells are narrow and hollow, with thick walls made of cellulose. They are pale when immature, but later become hardened and yellowed as a layer of lignin is deposited on their walls. Each cell is about 1 mm (0.04 in) long and 10 to 20 (0.0004 to 0.0008 in) in diameter. Coir fibres are typically 10 to 30 centimetres (4 to 12 in) long. The two varieties of coir are brown and white. Brown coir harvested from fully ripened coconuts is thick, strong and has high abrasion resistance. It is typically used in mats, brushes and sacking. Mature brown coir fibres contain more lignin and less cellulose than fibres such as flax and cotton, so are stronger but less flexible. White coir fibres harvested from coconuts before they are ripe are white or light brown in color and are smoother and finer, but also weaker. They are generally spun to make yarn used in mats or rope.

the coir fibre is relatively waterproof, and is one of the few natural fibres resistant to damage by saltwater. Fresh water is used to process brown coir, while seawater and fresh water are both used in the production of white coir.