We offer the best product range of and Raisins. 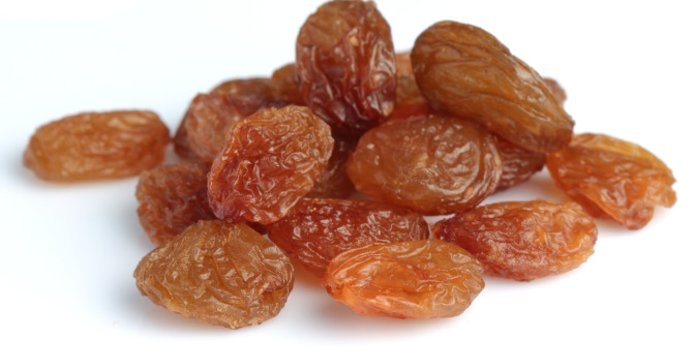 A  Raisin  is a dried grape. Raisins are produced in many regions of the world and may be eaten raw or used in cooking, baking and brewing. The word "raisin" is reserved for the dark-coloured dried large grape, with "sultana" being a golden-coloured dried grape, and "currant" being a dried small Black Corinth grape. Raisin varieties depend on the type of grape used, and are made in a variety of sizes and colors including green, black, blue, purple and yellow. Seedless varieties include the sultana (also known as Thompson Seedless in the USA) and Flame grapes. Raisins are traditionally sun-dried, but may also be water-dipped and artificially dehydrated. "Golden raisins" (called "sultanas" outside the US) are made from the sultana grape, treated with sulfur dioxide to maintain their golden color, and dried either on the vine or on special drying racks. Black Corinth or Zante currant are miniature raisins that are much darker in color and have a tart, tangy flavor. They are often called currants. Raisins can contain up to 72% sugars by weight, most of which is fructose and glucose. They also contain about 3% protein and 3.7%-6.8% dietary fiber. Raisins, like prunes and apricots, are also high in certain antioxidants, but have a lower vitamin C content than fresh grapes. Raisins are low in sodium and contain no cholesterol Product Specifications Commodity:  Raisins Variety:  Raisins of types : Golden yellow, Sultana-Brown, Sultana-Black, Green Grade:  AAA, AA, A Origin:  Tamil Nadu or Gujarat, India Quality Specifications Maximum occurrence of gravel or sand: 1 piece per 10kg Maximum moisture content: 16% Maximum nitrate sulfur (for golden): 2/1000 Maximum unclean raisins: 5% Maximum verminous raisins: 3% Maximum other kinds and forms: 1% Maximum raisins with stems: 10% Maximum length of bunches: 5cm/1kg Maximum crushed or damaged raisins: 5%