Our product range comtains a wide range of khoa and Ghee Khoa  is a dairy product widely used in the cuisine of the  Indian Subcontinent , encompassing  India ,   Nepal ,   Bangladesh and  Pakistan . It is made of either dried whole  milk  or milk thickened by heating in an open iron pan. It is lower in moisture than typical fresh cheeses such as  ricotta Khoa is used in various types of sweets: Pedha(penda in Gujarati) is sweetened khoa formed into balls or thick disks (like patties) with flavourings such as saffron and/or cardamom added. Gulab jamun, also a round ball sweet made from khoya and then deep fried and soaked in rose water flavoured sugar or honey syrup. A very popular Indian sweet. Barfi(or burfi) is also flavoured, but khoa is not the only ingredient. Typically, another ingredient, such as thickened fruit pulp or coconut shavings, is added to khoya and slow cooked until the moisture evaporates sufficiently to give the consistency of fudge, so it can be flattened and cut into rectangles, parallelograms or diamond shapes. Gujia, a sweet dumpling stuffed with khoa. Halwa is essentially a fudge made by adding khoa to give a dairy-like taste and texture and as a thickening agent 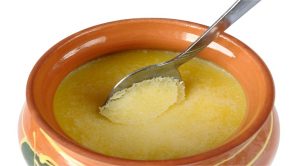 Ghee  is a class of  clarified butter  that originated from the  Indian subcontinent ; and is commonly used in  South Asian  and  Middle Eastern  cuisines, traditional medicine, and religious rituals. Ghee is prepared by simmering butter, which is churned from cream, skimming any impurities from the surface, and then pouring and retaining the clear, still liquid fat, while discarding the solid residue that settled on the bottom. [1]  Spices can be added for flavor. [2]  The texture, color, and taste of ghee depend on the quality of the butter, source of the milk used in the process and the duration of the boiling. Energy 469 kJ (112 kcal)