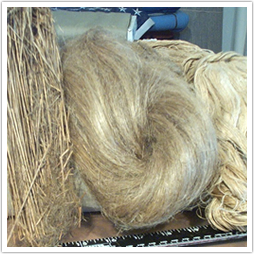 Flax is cellulosic bast fibre. Flax plant is a member of the genus Linum usitatissimum. Flax plants grow upto 1.2 m tall with slender stems. Flax is grown for both its Flax Seeds and Flax Fibres. Flax fibres are recovered from the Plant by the retting & scotching process. Flax fibres are also called Linen fibres. Linen fibres generally have a length of 25 cms to 125 cms.

After the fibres have been separated and processed, they are spun into yarns and woven or knit into linen textiles. Generally textiles with linen-weave texture from cotton and other non-flax fibres are also called as linen.