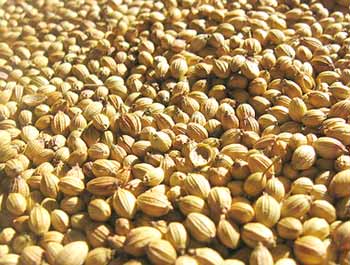 We have carved a niche as one of the prominent Organic Coriander Seeds exporters in India. Coriander is the seed of Coriandrum sativum, a plant in the parsley family. Coriander Seeds are globular and almost round, brown to yellow red, and 1/5 inch in diameter with alternating straight and wavy ridges. Coriander seeds when crushed have a lemony citrus flavor and are nutty, spicy and orange-flavored. Whole Coriander seeds are used for general digestive aid. Coriander seeds in India (Dhania) are mainly used in curries and garam masalas. Dry Coriander seeds are also a key ingredient in the South Indian cuisines for dishes like sambhar and rasam. We have grown into one of the trusted coriander seeds exporters from India .An aromatic annual Eurasian herb (Coriandrum sativum) in the parsley family, having parsley like leaves and umbels of tiny white to pinkish flowers. It is cultivated for its edible fruits, leafy shoots, and roots.

Traditional Ethnic Uses
Coriander is used in Indian curries, American , and sausages. The fresh young leafy plantlets of this herb are used in salads and various dishes as a flavoring and garnish. Also called Chinese parsley, cilantro. The seed like fruit of this plant, used whole or ground as a flavoring for food and as a seasoning, as in curry powder.

Taste and Aroma
Coriander has a mild, distinctive taste similar to a blend of lemon and sage. It is a fragrant spice.

History/Region of Origin
Coriander is probably one of the first spices used by mankind, having been known as early as 5000 BC. Sanskrit writings dating from about 1500 BC also spoke of it. In the Old Testament "manna" is described as "white like Coriander Seed." (Exodus 16:31) The Romans spread it throughout Europe and it was one of the first spices to arrive in America.