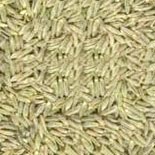 We are well reckoned as one of the supreme White Cumin Seeds Exporters and Organic Cumin Seeds Suppliers in India. Cumin (pronounced "comein") is the pale green seed of Cuminum cyminum, a small herb in the parsley family. The seed is uniformly elliptical and deeply furrowed. Cumin seeds Jeera are the seeds of the caraway family. Two types -- black and white are available. White ones are generally used in curries and other large varieties of food. The black ones known as 'Shah Jeera' is more pungent and mostly used in pulao and biryani. This spice is widely used in most Indian, Pakistani and Bangladesh dishes, also in Middle Eastern, North African preparations, used in Spanish stews and American pies.

Traditional Use
Cumin is frequently used in Mexican dishes such as chili con carne and hot tamales. One of the most typical Bulgarian meat dishes - kebapche (small sausage shaped burger or a small kebap) uses cumin as the main spice.