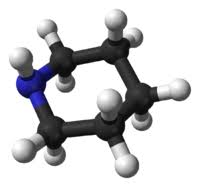 Piperidine is an organic compound with the molecular formula (CH2)5NH. This heterocyclic amine consists of a six-membered ring containing five methylene units and one nitrogen atom. It is a colorless fuming liquid with an odor described as ammoniacal, pepper-likehe name comes from the genus name Piper, which is the Latin word for pepper.Piperidine is a widely used building block and chemical reagent in the synthesis of organic compounds, including pharmaceuticals.