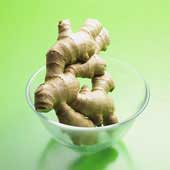 We are offering ginger. the company deals in the finest varieties of organic ginger root. It is procured from our self owned farm and so they are supplied in fresh form. The organic ginger powder is used to add a unique zing in the traditional as well as all kinds of dishes. It is also noted for its rich therapeutic qualities. It is utilized to cure various ailments viz. Rheumatoid arthritis, migraine, sore throats. Our ginger also improves blood circulation and reduces fat deposits in the arteries. Besides, we are a well known wholesale ginger supplier. We are also one of the most important dry ginger exporters in india.

ginger is an important spice in asian and western cooking, and has an increasing reputation as a medicinal plant.
ginger - plant profile
botanical names are often derived from their ancient names. The word zingiber is a good example. It is thought to come from the sanskrit word singabera which was from arabic and greek words meaning 'shaped like a horn'. It probably got its name because the rhizomes look like deer's antlers.

ginger plants can grow to about 1 m tall. The upright shoots sprout from the rhizome at the base of the plant.

rhizomes - knobbly and fleshy, covered in ring-like scars. This is the important part for food and medicine. Although the rhizomes grow underground, they are swollen stems, not roots. This is why fresh ginger is often referred to as 'stem ginger'.

flowers - the flowering spikes sprout directly from the rhizomes and are about 30 cm long. The flowers are purple with a cream-blotched base.

ginger rhizomes owe their popularity as much to their medicinal virtues as their food uses. For more than 5,000 years people have valued their 'hot' and 'warming' qualities. Today the rhizomes are commonly used in asian medicine to treat rheumatoid arthritis, migraine, sore throats, to improve circulation and reduce fat deposits in the arteries. Ayurvedic practitioners, use ginger rhizomes as a cure for cholera, anorexia and 'inflamed liver'. Many of these traditional medicinal properties are supported by recent scientific research.

medicines containing ginger come in a variety of forms. The fresh or dried rhizome can be made into teas and tinctures, or powdered and put into capsules. Pastoral communities in the southern india state of tamil nadu use ginger as a folk medicine to treat cattle suffering from gastric upset. They feed the ginger rhizome to cattle in the form of a herbal paste mixed with black pepper, asafoetida (ferula species) and sweet flag (acorus calamus).

ginger has a wide range of demonstrated health-giving properties, and it both stimulates the heart and settles the stomach. Over the last decade it has become a common over-the-counter herbal remedy, taken in many different forms. Its main use in the west is for motion sickness because of its anti-sickness properties.

many of its actions are due to the presence of compounds in the rhizomes called oleoresins, especially those known as gingerols and shogoals. The compounds work on the muscles of the gut to improve digestion. They also help to lower blood cholesterol, treat migraines, minimise the risk of thrombosis as well as help prevent cancer.

from sickness to swellings

ginger is often taken as a digestive aid and a cure for nausea, vomiting and dizziness. Ginger works best when treating post-operative nausea and morning sickness, although its effectiveness in treating sea- and other forms of motion sickness is still questioned by some scientists. Fresh rhizomes are said to help to reduce inflammation in conditions like osteo- and rheumatoid arthritis. in america, ginger is frequently used as a herbal alternative to antihistamines and antidepressants. Ginger can also help reduce blood sugar levels and so help prevent the onset of diabetes. Finally, antioxidant properties are likely to contribute to slowing down aging, as well as its ability to fight cancer.

the plant's fresh juice is applied to the skin to treat burns, while the essential oil may be used for pain relief.

ginger has been used as a food and a medicine for thousands of years and is considered a safe herbal medicine. Only occasionally have side effects such as heartburn, diarrhoea and stomach discomfort been experienced. At one time its use was not advised during pregnancy and breast-feeding but there is little scientific evidence to support this, so long as doses are controlled. The juice and oil of ginger may cause irritation if applied to the skin of people sensitive to it.
ginger - food
ginger is a popular spice worldwide. In asia, it is mainly used in the form of fresh rhizomes, peeled then grated or chopped. Its aroma has been described as ''rich and warm, with a refreshing, woody note and sweet, citrus undertones''. It is a versatile spice that works well in savoury and sweet dishes in many culinary traditions.

often paired with garlic, fresh ginger is a key ingredient in many south asian savoury dishes. In the north of india, garlic, ginger and onion are often pounded together to make a paste which is then fried to form the basis of vegetable and meat dishes. In southern india, chillies and turmeric replace the onion.not all communities appreciate ginger: many jains consider ginger to be a prohibited food, alongside other tubers.
preserved ginger - pieces of ginger rhizome in a sugar syrup - is a popular ingredient in sweet dishes in south asia. Fresh ginger is often pickled in vinegar in southeast asia. In japan pickled ginger is known as as 'gari' and 'beni-shoga' and eaten with sushi.

until recently, most ginger exports were in the form of dried, powdered ginger. This is the form in which ginger was used in ancient rome and medieval europe. In europe ginger was used on all kinds of food in the medieval period, but since the 18th century, mainly in baked goods such as gingerbread. Ginger is a non-alcoholic soft drink, popular in the west indies and in britain. It can be made with fresh or powdered ginger. Home-made ginger is a refreshing drink in summer. With the increasing popularity of asian cooking, fresh ginger is now widely available. If frozen after peeling and grating, fresh ginger can conveniently stored for home user.