We offer a complete product range of and Groundnut Oil 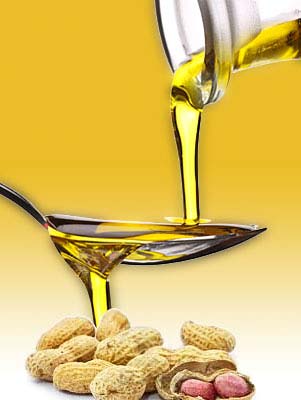 Peanut oil, also known as groundnut oil or arachis oil, is a mild-tasting vegetable oil derived from peanuts. The oil is available with a strong peanut flavor and aroma, analogous to sesame oil.[1][2] It is often used in Chinese, South Asian and Southeast Asian cuisine, both for general cooking, and in the case of roasted oil, for added flavor. Peanut oil has a high smoke point relative to many other cooking oils, so is commonly used for frying foods. Its major component fatty acids are oleic acid (46.8% as olein), linoleic acid (33.4% as linolein), and palmitic acid (10.0% as palmitin).[3] The oil also contains some stearic acid, arachidic acid, behenic acid, lignoceric acid and other fatty acids.[4] Antioxidants such as vitamin E are sometimes added to improve the shelf life of the oi