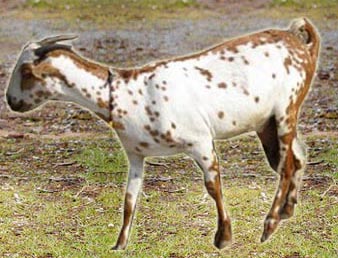 We are a well-known Goat Supplier. We make available healthy Goats that offer a number of benefits. Landless, small and marginal farmers are benefitting greatly from Goats. Goat Rearing is very popular in rural areas. Rearing Goats is very easy as they can survive on easily available shrubs & trees, and even in the harsh weather conditions. The meat and milk of Goat is in extensive demand. We supply disease-free Goats to farmers at very competitive prices. Advantages Of Goat Rearing Due to small body size and docile nature, housing requirements and managemental problems with goats are less. The initial investment needed for Goat farming is low. Unlike large animals in commercial farm conditions both male and female goats have equal value. Goats are prolific breeders and achieve sexual maturity at the age of 10-12 months gestation period in goats is short and at the age of 16-17 months it starts giving milk. Twinning is very common and triplets and quadruplets are rare. In drought prone areas risk of goat farming is very much less as compared to other livestock species. Goats are friendly animals and enjoy being with the people. Under proper management, goats can improve and maintain grazing land and reduce bush encroachment (biological control) without causing harm to the environment. Goats are ideal for mixed species grazing. The animal can thrive well on wide variety of thorny bushes, weeds, crop residues, agricultural by-products unsuitable for human consumption. Slaughter and dressing operation and meat disposal can be carried without much environmental problems. The goat meat is more lean (low cholesterol) and relatively good for people who prefer low energy diet especially in summer and sometimes goat meat (chevon) is preferred over mutton because of its "chewability" Goat creates employment to the rural poor besides effectively utilising unpaid family labour. There is ample scope for establishing cottage industries based on goat meat and milk products and value addition to skin and fibre. Goats are 2.5 times more economical than sheep on free range grazing under semi arid conditions. No religious taboo against goat slaughter and meat consumption prevalent in the country. Goat is termed as walking refrigerator for the storage of milk and can be milked number of times in a day. Goat milk is easy to digest than cow milk because of small fat globules and is naturally homogenised. Goat milk is said to play a role in improving appetite and digestive efficiency. Goat milk is non allergic as compared to cow milk and it has anti-fungal and anti bacterial properties and can be used for treating urogenital diseases of fungal origin. 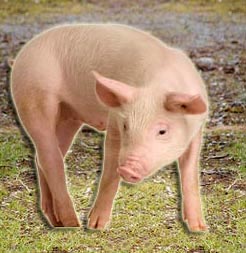 Pig rearing is a vital part of livestock farming. Piggery is the most potential source of meat production among the various livestock species. Along with providing meat, Pigs are also known for offering bristles and manure. For seasonally employed rural farmers, Pig Farming provides employment opportunities and supplementary income for improvement of their lives. Thus, Pigs are in extensive demand. To fulfill this demand, we have emerged as a prominent Pig Supplier. We are engaged in making available healthy Pigs that are reared by us in healthy environment, and are free from diseases. Why Pig Farming? Pig farming requires small investment on buildings and equipments. The pig can utilize wide variety of feed stuffs viz. grains, forages, damaged feeds and garbage and convert them into valuable nutritious meat. However, feeding of damaged grains, garbage and other unbalanced rations may result in lower feed efficiency. Pigs store fat rapidly for which there is an increasing demand from poultry feed, soap, paints and other chemical industries. They are prolific with shorter generation interval. A sow can be bred as early as 8-9 months of age and can farrow twice in a year. They produce 6-12 piglets in each farrowing. Pigs are known for their meat yield, which in terms of dressing percentage ranges from 65 - 80 in comparison to other livestock species whose dressing yields may not exceed 65%. There is good demand from domestic as well as export market for pig products such as pork, bacon, ham, sausages, lard etc. The pig has got highest feed conversion efficiency i.e. they produce more live weight gain from a given weight of feed than any other class of meat producing animals except broilers. Pigs manure is widely used as fertilizer for agriculture farms and fish ponds. Pork is most nutritious with high fat and low water content and has got better energy value than that of other meats. It is rich in vitamins like thiamin, Niacin and riboflavin. Pig farming provides quick returns since the marketable weight of fatteners can be achieved with in a period of 6-8 months.

We are offering emu chicks. emu chiks of 3 month old 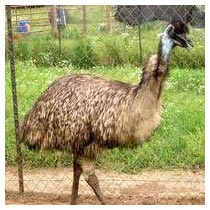 We are offering emu bird. emu bird of 3rd laying