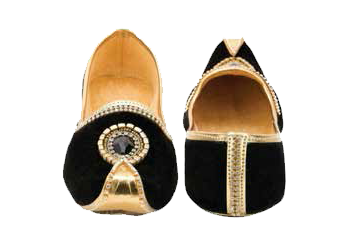 Jodhpur being a city full of colors has a craft culture which is as important to their economy as tourism. The mochis or cobblers of Jodhpur craft leather into light and intricately embroidered footwear, locally known as mojari or pagrakshi. They are cut using traditional patterns that make no distinction whatsoever between the left and right foot and is shaped using the three-piece traditional wooden cobbler’s anvil and stitched with thick cotton threads. The mojari best showcases the traditional footwear of Rajasthan and represents their culture. 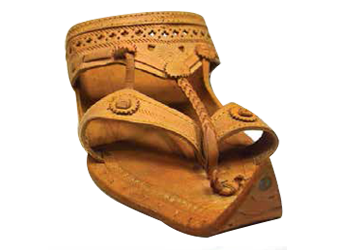 Kolhapur chappals are flat, intricately patterned, handcrafted leather footwear traditionally made in Kolhapur in Maharashtra by the Chamar community whose hereditary occupation is tanning and leather work. Originally, the footwear was made for daily use by farmers and field workers but the simple ingenious design has gotten global appeal over time, some of the best types being Awazi (which makes a crisp sound while walking), Shahu and Suraksha Puda to name a few. The cords used to stitch the sandals are made of leather and, surprisingly, no nails are used in the making of these beautiful sandals.