Our product range comtains a wide range of and cashew nuts 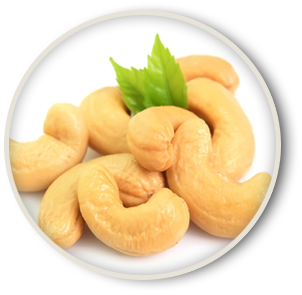 We collect Raw Cashews from African Countries, Indonesia, Goa etc. and then process it. Cashew came to India with the Portuguese and is a native of Brazil. Cashew is the third largest consumed tree nut in the world. The Indian soil favoured this nut so well that India has been cultivating cashew nuts as a popular native crop, making this country the second largest cashew producers in the World. The tropical climatic conditions have helped in cultivating cashew nuts along the eastern and western coastal stretch of India. As a matter of fact, over 60 percent of the cashews consumed globally are processed in India. GLOBENET ENTERPRISE is prominent Indian cashew nut manufacturers of processed cashews from India. We have latest cashew processing facility at Ahmedabad – Gujarat, Vibrant State of Gujarat. We are reliable processed cashew nuts suppliers from Gujarat, India who maintain quality of cashews by following food safety norms and stringent checks. Depending upon the customer specifications we can offer cashew nuts in different weight requirements. What does it take to process cashew ?   It takes about 20-21 days and many labour intensive stages for cashew to reach the delicious edible state. Once harvested, the nuts are collected and amply dried in the sun. The cashews are then steamed and shelled using cutting machines to extract kernels. The kernels are passed through Borma dryers to remove minutest levels of moisture. Before the kernels are sent for peeling, the husk is removed from the dried kernels – this step defines the quality of cashew.After this the kernels are sent for inspection once before passing through metal detectors and finally packed into cartons. The major international buyers of cashew include countries like Japan, UAE, Canada, Saudi Arabia, Singapore and Israel.