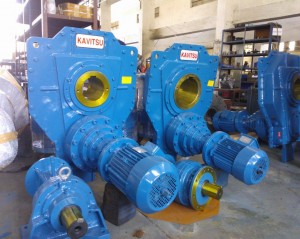 When it comes to sugar crystallizer drives, more and more people are going towards Planetary drives as their preferred choice over the conventional Worm and worm wheel drives. The advantages of using a Planetary gear over a conventional gear system are: They have high power density as compared to a traditional Worm wheel arrangement. Due to the higher power density as compared to conventional systems, they are compact. It definitely saves up space and the system looks clean. They are highly efficient when it comes to power transmission. Around 95% efficiency can be achieved using these type of gear drives. They provide greater stability as compared to the traditions arrangement. They can be directly fitted on the shaft of the crystallizer equipment, thus eliminating the usage of couplings. Load is distributed evenly among the planetary gears. The crystallizer drive is generally a combination of helical and planetary drive systems.     [blockquote type="blockquote_quotes" align="left" width="650" el_position="first"]   Kavitsu has been providing reliable solutions to Sugar factories since past 15 years! Our crystallizer drives are running non stop since 1998!