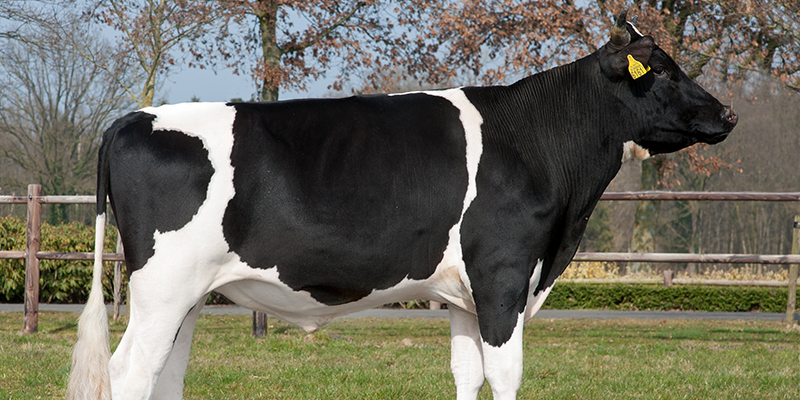 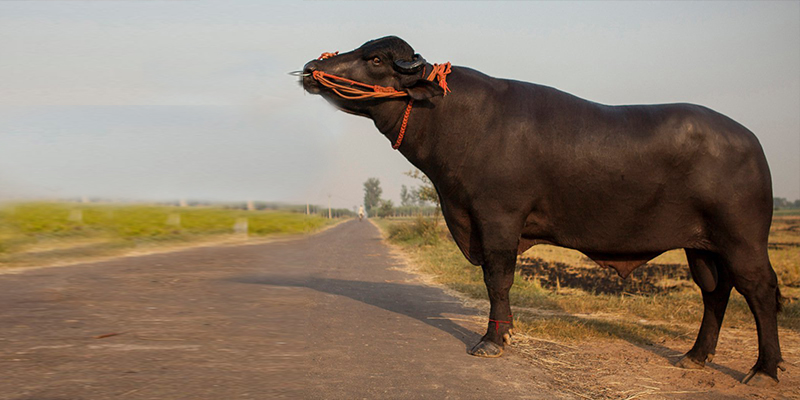 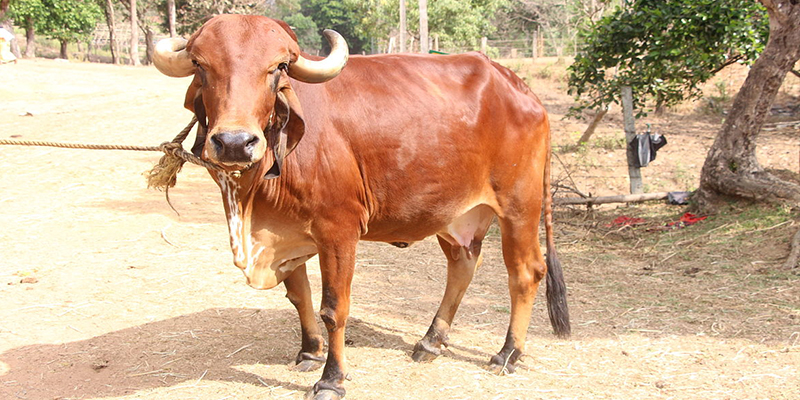 Gir Physical characteristics of cow The color of Gir cow’s body is found in white, dark red or chocolate with brown spots or sometimes in bright red color. Ears are tall and keep hanging. Gir’s most unique feature is his convex brow, which protects his forehead from quick sunlight. It is found in medium to large size. The average weight of female gir is 385 kg and its height is 130 centimeters whereas the average weight of male gir is 545 kilograms and height is 135 centimeters. Their body skin is very loose and flexible. The horns are folded backwards.    Other specialties of Gir Cow This cow is also known for its good disease resistance. Gir is a highly fertile breed which gives calf regularly. A gir first gives calf at the age of 3.   Gir cow’s milk production The cuds grow well in Gir cows . This cow gives more milk than 14 liters per day. Its milk contains about 6.0 percent fat. The average milk production in the fall of one breast is 2200 kg. These animals are adapted for different climates. And can stay easily at hot spots. 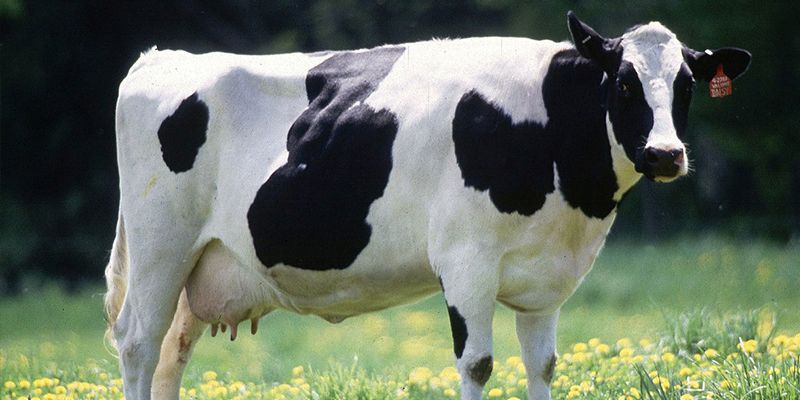 History of Holstein Cows About 2, 000 years ago Holstein cows were born in the Netherlands. When a new breed was developed through cross-breeding of Holland and two Gauge breeds of Germany, which was named Holstein Frecienen. Through this crossbreeding, a breed developed which produced high milk despite limited food resources. Basically, this breed was known as Holstein-Friesians but now it is known only as Holstein, Friesian cattle are still present but different from the Holstein breed. There is a friction breed from the United Kingdom, Newzealand, and Holland, and these animals have a small body with Holstein’s animals. Physical Characteristic Color (Holi) – Holstein Cow is found in a mixture of black and white colors. Some cows have also been seen in a black, red and white mixture. Weight (weight) – Holstein Friesian cattle weight – A healthy calf weighs 40 to 50 kg (75-110 lbs) or more at birth. The weight of a mature Holstein cow is 680-770 kg (1500-1700 pounds). Height – Their height is 145-165 centimeters (58-65 inches). Head – HF cow’s head is very long and comparatively narrow. Temperament – These animals are cool of nature. Horns – HF animals do not have horns. If the beaks are there then they are very small. Milk Production Holstein cows give the best milk in the world. In a word, this cow gives milk to 4500-7000 liters. Provides 15-40 liters of milk in one day. In the National Livestock Championships 2016, the HF breed’s cow gave 66.713 liters of milk in a day to the national level by establishing a new record. From this very point, the fertility of this cow can be estimated. HF cow’s milk contains less fat. Only 3.5-4% fat is in this cow’s milk. HF Cow Price Holstein Friesian cow cost in India The price of Hf cow depends on its milk production and age. Usually, in India, this cow is found in 35, 000 to 80, 000 rupees. 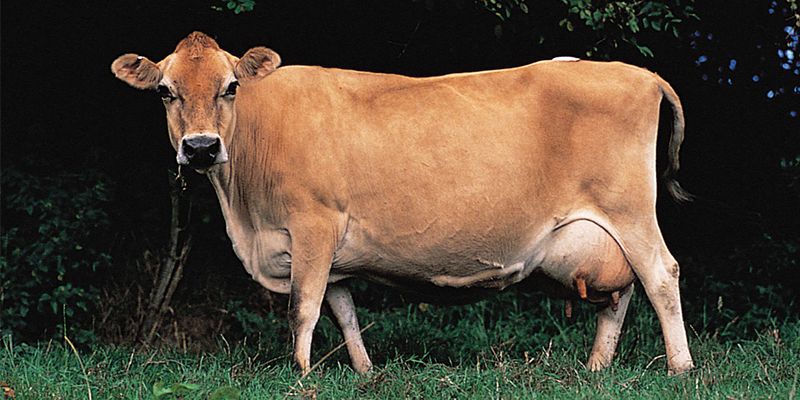 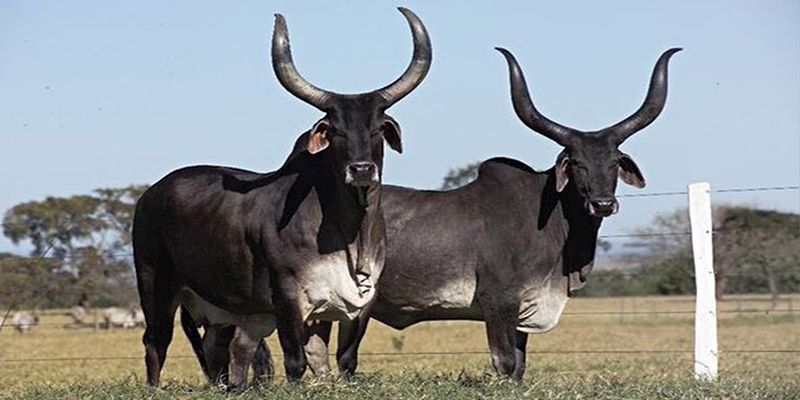 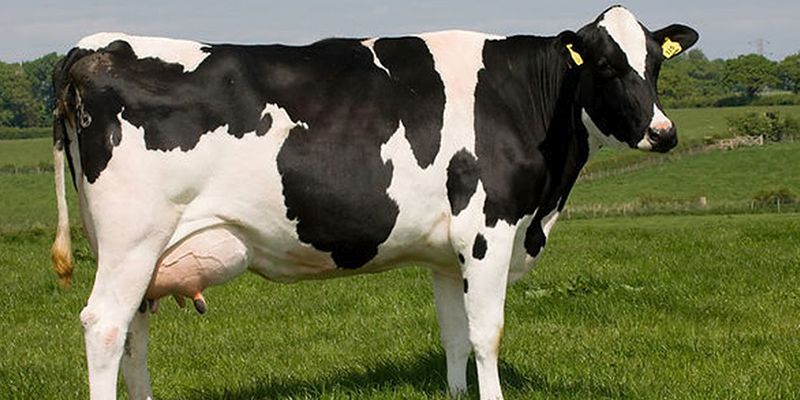 Physical characteristics of Karan Fries breed: – This breed has black and white spots on the body, forehead, and tail of the cows. Thane’s color is dark. Karan Friesian (KF) cows are very straightforward. Its female children are early adult compared to males, and at the age of 32-34 months, they acquire the ability of conception. Pregnancy is 280 days. Once the baby is given it can re-fertilize in 3-4 months. In this case, it proves more beneficial than local breed cows. Karan Fries cow milk production: – Karan Friesian (KF) cows are considered as very good milk producer breeds. These cows give milk up to 9 litters to 10.50 litters per day, and they have the capacity to provide milk up to 3000 to 3400 litters a year. These breed cows give 15-20 liters of milk daily when there is a sufficient amount of green fodder and balanced compounds and proper environment. Milk yields up to 25-30 liters per day during the 3-4 month period of giving the child. Due to the high milk production capacity, there is a high transit infection in the cows and also the lack of mineral content. Once known on time, the treatment of such infections is easily done. The Karan Fry breed is very popular among the dairy farmers of North India. 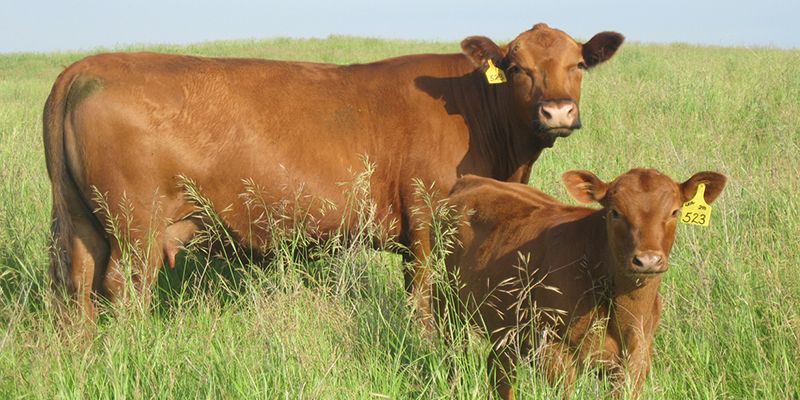 The Karan Swiss cow were developed in India at the National Dairy Research Institute at Karnal. The breed was developed using Brown Swiss and Sahiwal.   The Karan Swiss is a dual purpose breed with the oxen being well suited for work and the Karan Swiss cow giving good quantities of milk.   The breed is usually light gray to dark brown in color. Males will average 136 cm in height and weight from 600 to 750 kg (1300 – 1650 pounds). 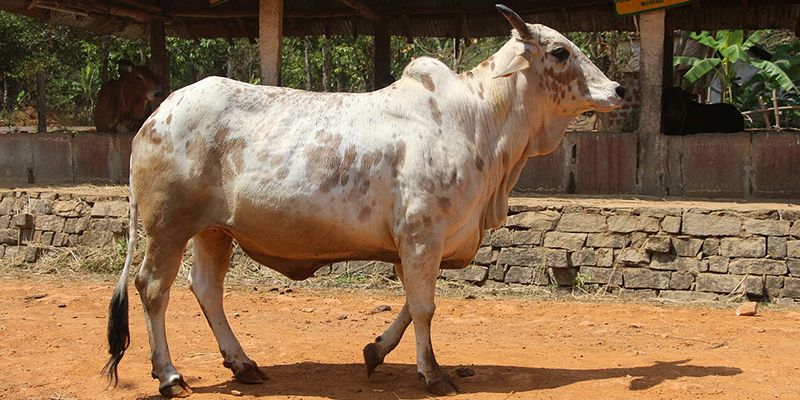 Physical characteristics of Rathi cows: – Adult Rathi Cows weight about 280-300 kg and bulls 350-350 kg. Rathi is very attractive in animal skin, which is found in a mixture of brown and white or black and white colors. Other attributes of Rathi breed: – There are two types of this animal. One Rath and the other Rathi Rath breed gives more milk while Rathi does more of its work It is believed that the Rathi animal has been developed from Sahiwal, Sindhi, Tharparkar and Dhanni breeds. Rathi cow milk production: – Rathi breed is an important milestone in Indian cows. This cow gives 7-10 liters of milk per day. Somewhere – it has been seen to give up to 15 liters of milk. The Rathi breed’s bulls are hardworking. The bulls of this breed also work for 10 hours continuously in hot weather. They can pull a lot of stuff in the desert. This Rathi cow also gives more milk by eating less, gives the milk approximately 1800-3500 liters of milk. Due to dual purpose, it is a prominent cow breed in Rajasthan and Gujarat. 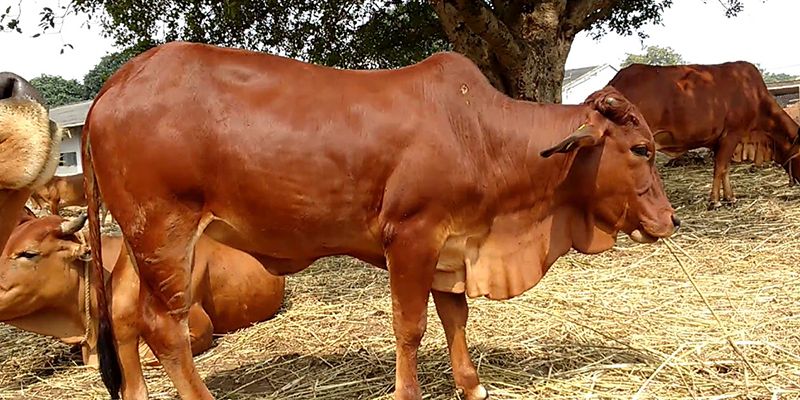 Red Sindhi cow and its features (specialty): Red Sindhi Cow is considered a breed produced in Pakistan’s Sindh province. In India, it is found in Punjab, Haryana, Karnataka, Tamil Nadu, Kerala, and Orissa. Sahiwal Lal Sindhi is like a cow in the middle of the cow’s shape. The body weight of female Sindhi is 300-350 kg whereas adult male weight is 400-500 kg. The red sandy cow is found in light and dark red color. The forehead is big and the bulge is on it. Ears are beautiful and small. The red horns are rotating.   Red Sindhi Cow’s milk production: This cow is a very good breed producing cow. A red Sindhi cow gives 10 liters of milk daily. The annual milk production of this cow is 3500 liters. Due to good milk production and many factors, it is widely used for milk production in Pakistan, India, Bangladesh, Sri Lanka, and other countries. 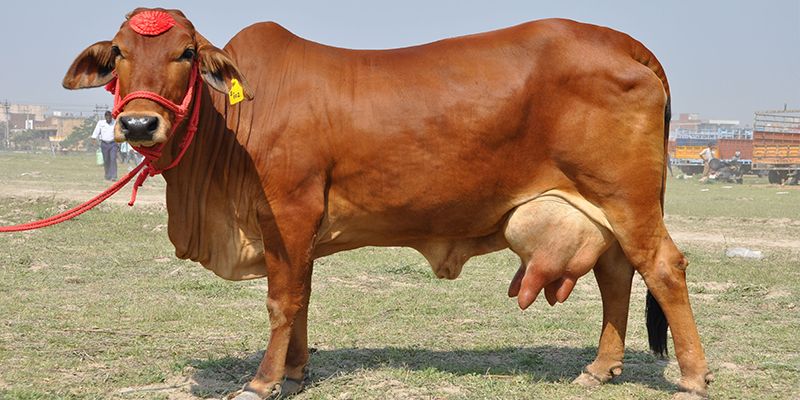 Sahiwal Cow Physical characteristics: Deep body, loose skin, small head, and little horn are its main characteristics, its body is generally long and fleshy. Their tails are small, nature is lazy and their skin is smooth. The tail is thin and short. This independence was found in the places of the former United States of Montgomery and around the Ravi river in places such as Lyallpur, Lodharan, Ganjivar etc. Sahiwal cow is found mostly in northern India. On one occasion, it gives milk for up to 10 months. It has the capacity to supply milk from 10 to 16 liters. There is enough of this in their milk. Mainly found in Punjab, Haryana. In the case of an occupational farm- 2400 kg. Interval of reproduction period – 15 months. Specialty: The most important feature of Sahiwal Cow is that it can tolerate more heat easily and can easily bear frost. Due to good heat tolerance and high milk production, these cows have been exported to Asia, Africa, and several Caribbean countries. The most important feature of the Sahiwal cow is that its milk contains plenty of protein and there is also a high amount of milk which is more than any other cows. This cow gives milk to 12 to 16 liters per day. Having good care of good nature, they can stay anywhere. High milk yield Easy of reproduction 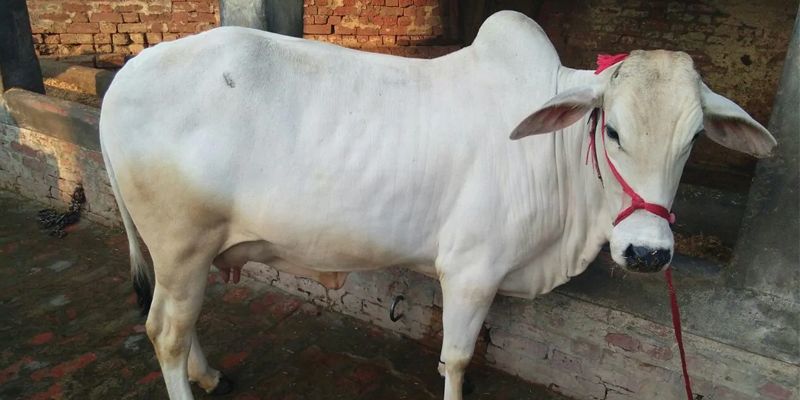 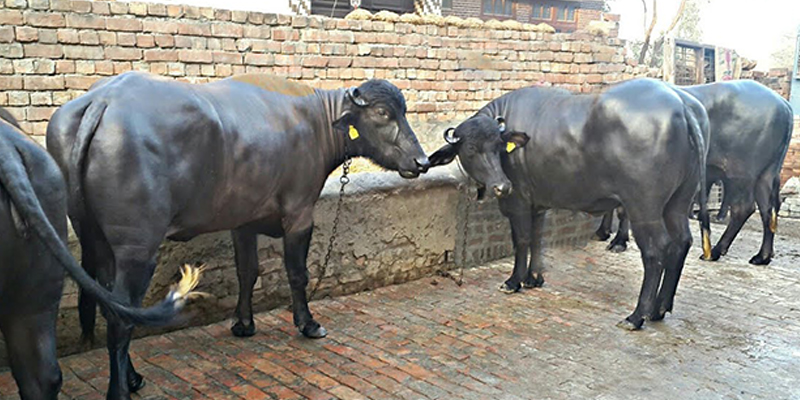 Murrah buffalo is a species of pet buffalo that is reared for milk production. It is basically  animal of Punjab, but it is now also transmitted in other states and other countries (like Italy, Bulgaria, Egypt etc.) In Haryana, it is called black gold. Murrah is the best breed for fat production in milk. Murrah buffalo’s horn is yellowish-shaped. People of Haryana know it by name as black gold. Its milk is found in 8% fat. Buffalo’s color is black.   Everybody wants to go for the price of Murrah buffalo because the breed has the ability to give milk in the buffaloes and the amount of fat in milk is also high. According to the amount of fat in dairy-based milk, milk prices are fixed! Usually, 8 percent fat milk costs 50 to 60 rupees! The biological origin of Murrah species buffalo was in Punjab, which is still called black gold in Haryana!   What is the price of Murrah buffalo in Haryana How many times have given birth to children, the cost of the first bison buffalo is high! How many liters of milk each day gives! Fat in the milk! Prices depend on the health of buffaloes! Usually, the price of is between 50 thousand to 100, 000 ₹! Murrah buffaloes in Bihar’s Araria Murrah buffalo in Haryana district were said to be worth 70 thousand rupees, which buffalo could give 12 litres of milk daily! If buffalos are able to give more than 12 litres of milk, then it can cost more than 85 ₹ thousand! In other states and districts of India, there can be a difference in prices! Easy Way to Identify Murrah Buffalo – The name of Murrah buffalo is Bubalus Bubalis! Except for the indigenous buffaloes, this breed’s buffalo’s eyes and horns are small, which you can recognize by seeing! This breed’s buffalo horn is curved and is very small! If you touch the horn by hand, its edge will feel very thin! The neck is long, while its back is very wide! This buffalo skin is quite thin and its color can be the black and light color too!