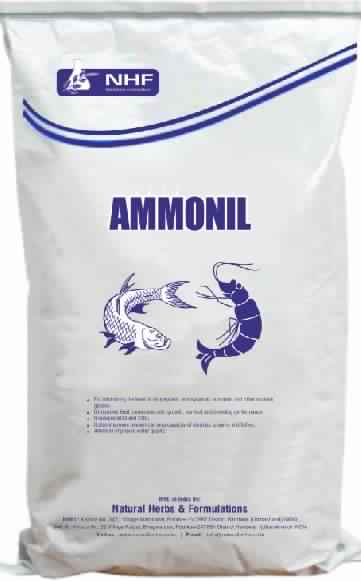 Ammonil is a natural animal feed supplement to effectively control the production and emission of ammonia and other noxious gases in fish, prawns, shrimps and other aqua species. Ammonia is a gas, which is very harmfull in aqua culture. Ammonia in gaseous form is primarily released from the gills of fish, prawns and shrimps as a metabolic waste from protein breakdown and from the lesser secondary sources such as decomposition of un-eaten feed and organic waste by bacterial actions. Ammonia is extremely toxic and its toxicity is occoured mainly due to its un-ionized form. Ammonia enters to the blood stream as a result of nitrogen metabolism containing high levels of ammonia which can cause both immediate and long term gill damages. Ammonia concentration is increased because of reduced algal population in the pond and due to reduced rate of assimilation of ammonia by plankton algae.High aquatic pH also severely account for the enhanced aqua concentration of ammonia.  .Due to the negative effect of ammonia fish usually become sluggish, often remain at the water surface as if gasping for air. Very serious effect of un-ionized ammonia are capable of killing fish over a few days starting at about 0.6 ppm. Chronic exposure to toxic  ammonia levels as low as 0.06 ppm can cause kidney damage, reduction in growth, brain malfunctioning and reduction in oxygen carrying capacity of fish. Since aquatic animals perform all their bodily functions in water, good water quality in aquaculture system should essentially be maintained, mainly in reference to ammonia concentration. Benefits For minimizing the level of atmospheric and systemic ammonia and other noxious gasses. It improves feed conversion rate, growth, survival and breeding performance. It reduces BOD and COD. It also improves oxygen carrying capacity of shrimps, prawns and fishes. Ammonil improves water quality. Ammonill should be mixed with sufficient quantity of fresh water to make a paste which should then be thoroughly mixed with the feed. After drying the same may be broadcasted or administered as per practice at the fish / Aqua farm. To be giving regularly or as advised by the aquaculture consultant. PRESENT A TION 500 gm pack.

CAL D PHOS GEL  A complete solution for dairy cattle Milking cows and other dairy cattle should always be provided adequate amounts of calcium to maximize production and minimize health problems. A major concern in the mineral feeding of dry cows/cattle relates to providing optimum levels of calcium and phosphorus in order to decrease the occurrence of milk fever. Prevention of milk fever if an important consideration in maximizing reproductive efficiency. Cal-D-Phos Gel is a unique product formulated by Natural Herbs and Formulation, which prevents from all above said problems. Directions for use Regular Use For higher milk yield, administer 50-70 ml per animal per day for 5-10 days or as advised by Consultant Veterinarian.  To Prevent Milk fever give one tube at the first sign of calving and give another tube 6 to12 hrs. Post calving, repeat every 12 hrs. as needed or as advised by Consultant Veterinarian. A post calving dose of Cal-D-Phos is very beneficial. Product presentation 250 ml in Tube.