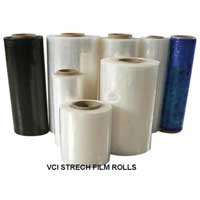 We are known as one of the major VCI Stretch Film Manufacturers, Importers, Exporters, and Suppliers in India. Our VCI Stretch Film eases in packing the metal parts and is highly effective against corrosion. The VCI Stretch Film, offered by us, is made up of the finest Polyethylene, with a treatment of VCI (Vapor corrosion Inhibitors). A thinner VCI Stretch Film provides better vapor barrier, higher strength, longer protection, and lower cost than VCI Paper. Advantages : Transparent film High strength & flexibility Heat sealable