We offer a complete product range of and Red Chilli Dried 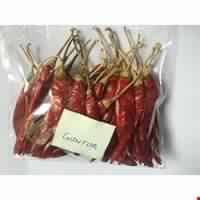 The chili pepper is the fruit of plants from the genus Capsicum, members of the nightshade family, Solanaceae. In Australia, Britain, India, Ireland, New Zealand, Pakistan, South Africa and in other Asian countries, it is usually known simply as chilli. The substances that give chili peppers their intensity when ingested or applied topically are capsaicin and several related chemicals, collectively called capsaicinoids. Chili peppers originated in the Inida.  Many cultivars of chili pepper spread across the world, used in both food and medicine. Chilies were brought to Asia by Portuguese navigators during the 16th century. Worldwide, some 3.8 million hectares (about 9.4 million acres) of land produce 33 million tons of chili peppers (2010 data). India is the world's biggest producer, consumer and exporter of chili peppers. Guntur in the South Indian state of Andhra Pradesh produces 30% of all the chilies produced in India. Andhra Pradesh as a whole contributes 75% of India's chili exports