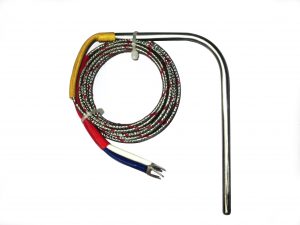 Temperature measuring point : Pick shell / insulation / dew point. Thread : 4/1, 5/16, M8, M6, M12. Temperature range : -50°C~950°C. K Type Thermocouple  is the most common type of thermocouple. It is reliable, inexpensive, and accurate and its temperature range is wide. It is mostly used in nuclear applications due to the relative radiation hardness. The maximum temperature (continuous) is nearly 1, 100°C. These types of thermocouples are used widely in the industry. They have very good resistance to oxidation and high thermopower. They provide us with correct temperature monitoring in the range between  -200°C and  1370°C (-328°F to 2498°F). They consist of nickel-5% aluminum and silicon (-) wire vs. nickel-10% chromium (+) wire. One should use this kind of thermocouple in oxidizing or inert atmospheres.  The heating element  like  electric heaters  is the best source to heat it up. They are mostly used at temperatures over 540°C (1004°F) because of the higher oxidation resistance as compared to J, T or E types of thermocouples. The range of K Type Thermocouple : Extension wire –   Between 32° F and 392° F (0°C to 200°C) Thermocouple grade wire – Between 454° F and 2, 300° F (–270°C to     1260°C) Accuracy (which will be greater) : Special Limits of Error       –                 +/- 1.1C or 0.4% Standard                             –                  +/- 2.2C or +/- .75% Names of Elements : For describing the positive element of this type of thermocouple (KP), following names can be used: ThermoKanthal-KPs, HAI-KP1, Tophel+, Nickel-chrome, Chromel2, and T-13. The negative element of this type of thermocouple (KN), is described by these names: ThermoKanthal-KNs, HAI-KN1, T-2s, Nial+, Nickel-silicon, and Alumel2.   Cautions to Take: Some conditions should be avoided while using this type of  K thermocouple . It should not be used in vacuum applications because of the vaporization of chromium in the positive element. Also, it is not supposed to be used in the sulphurous environment as both of the elements will corrode rapidly and eventually the negative element will fail mechanically because of being brittle. One should also avoid reducing atmospheres. The green-rot phenomenon can be caused due to low oxygen levels. In this phenomenon, chromium in elements will start oxidizing which cause very large negative drifts in calibration. Take a look here as well, actually, If you are a wholesaler then you can have direct contact to thermocouple manufacturers near your area for bulk order. Type K Thermocouples  are specified at the time when metallurgy was not as advanced as it is nowadays. As a result, the characteristics can vary extensively between samples. Nickel which is the constituent metal of K type thermocouple is magnetic. Thermocouples made with magnetic material have a characteristic that they are subjected to a deviation in output whenever the Curie point is reached by the material. This happens with  thermocouple type k  at nearly 185 °C. Hope you like the content and him information given by us. If still have any query about the product or anything then don’t forget to contact us.  FEATURE:- Premium Quality. Affordable Reliable Product Details: Minimum Order Quantity:  6 Piece Power(Watts):  As per requirement of application Voltage:  As per requirement of application Size:  As per requirement of application 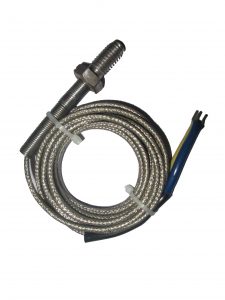