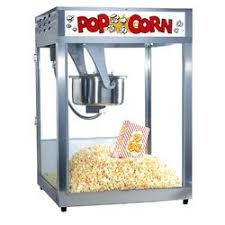 A  popcorn maker  (also called a  popcorn popper ) is a machine used to pop popcorn. Since ancient times popcorn has been a popular snack food, produced through the explosive expansion of kernels of heated corn (maize). Commercial large-scale popcorn machines were invented by Charles Cretors in the late 19th century. Many types of small-scale home methods for popping corn also  Commercial popcorn machines are commonly found in movie theaters and carnivals, producing popcorn in a pan of hot oil, which has a pproximately 45% of its calories derived from fat. Hot air popcorn poppers appeared for home use in the late 1970s, which produce popcorn with only 5% of its calories derived from fat.