We offer the best product range of and Red Chili Powder. 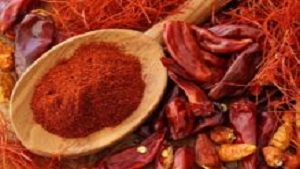 The Indian chili powder is made from spicy ground chilies and is often hotter that the chili powder available in the US/European stores. It has a pungent, hot aroma with a strong bite to it. The red Chili contains up to seven times the vitamin C level of an orange and has a range of health benefits, including fighting sinus congestion, aiding digestion and helping to relieve migraines and muscle, joint and nerve pain. It’s also a good source of vitamins A and E. Features: Safe to consume Longer shelf life Free from impurities   India is the world’s largest producer, consumer and exporter of chilies in the world. India also has the largest area under chilies in the world. Chilies are the most common spice cultivated in India. It is estimated that India produced 1060345 tons of dry chili from an area of 8, 84, 183 hectares in 2003-04. Chilies are valued principally for their high pungency and color. Almost all the states of India produce the crop. The Indian Chili growing states are Andhra Pradesh (46%), Karnataka (15%), Maharashtra, Madhya Pradesh, Orissa, West Bengal, Rajasthan and Tamil Nadu. Indian Chili can grown during the entire year at one or the other part of the country. However, the major arrival season extends from February to April. The crop planting starts from August and extends till October. While, the harvesting begins from December with 5% of the arrivals usually reported in this month. The peak arrivals are reported in February to March. There are several varieties of Indian Chili and the most popular among these are Sannam, 334, 273, Byadgi, Wonder Hot, Mundu, Teja, Yellow Chilies & Tomato Chilies India is the largest consumer of Chili in the world. Around 90% of India’s production is consumed within the country. India exports around 80000 – 100000 tons of chilies a year. India exports chilies in the form of dried chilies, Chili powder, picked chilies and Chili oleoresin. Indian Chili is mainly exported to USA, Sri Lanka, Bangladesh, the Middle East and the Far East. Factors Influencing Chili Markets The commodity displays high volatility, with the prices heavily dependent on season, production in different producing tracts spread across the country, demand from exporters and the stock available at the cold storages. The prices of the major chili varieties sold in the country are correlated with each other. As a result, the players in other varieties can also hedge their risks through this single variety.