We offer the best product range of and garden trays. 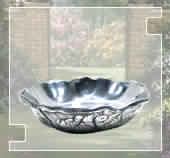 Garden trays are multi utility or multi-purpose objects that are present in almost every garden these days. They can be used as planters, as watering trays, grain or seed trays, or simply decorative trays (gravel trays) with pebbles, plants and moss, etc. These trays are required in any garden for proper maintenance. Although garden trays are very functional, but it doesn't mean that they are not appealing. In actual fact, they are recognized more as an adornment to the garden than mere a utility item.  Garden trays can be plastic trays, wooden trays, stone trays, terracotta trays, or resin trays. Each has a different look and utility. Though they all can be used for decorative purposes, wooden trays cannot be used for watering. Terracotta trays can be used to display plants. They can be used as side table settings with candles or glasses, etc. These trays can be molded, painted, carved, and adorned with different patterns. These beautifully designed garden trays add a grace to your complete garden setup. The designer garden trays made of wood look great when kept on the garden tables. Decorative as well as functional, garden trays have become the intelligent choice of almost all gardening lovers.