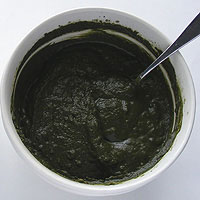 Indigo refers to several species of Indigofera, famous for the natural blue colors obtained from leaflets and branches of this herb. Of primary importance are French indigo, Indigofera tinctoria L., and Guatemalan indigo, Indigofera suffruticosa Mill., which was formerly classified as Indigofera anil L. These plants are perennial shrubs with an erect stem reaching a height of 1 to 2 meters. The French and Guatemalan indigo differ in size and shape of the leaflets and pods. Prior to the development of synthetic aniline and indigo dyes, the indigo species were grown commercially in the East Indies, India, and parts of North, South, and Central America for export and domestic use. Popularity and economic value of the plant reached a peak during the Middle Ages, when indigo was the most important dye plant for blue color in the western portion of the world. As a medicinal plant, indigo has been used as an emetic. The Chinese use Indigofera tinctoria L. to clean the liver, detoxify the blood, reduce inflammation, alleviate pain, and reduce fever. The powdered root of Indigofera cf. patens is used in South Africa to alleviate toothache. Indigofera spirata is known as a plant teratogen because of the presence of indospicine. Indigofera endecaphylla plant, creeping indigo, is poisonous and has been responsible for livestock death. Indigofera arrecta Hochst. ex A. Rich and Indigofera caroliniana Mill are used as dye plants