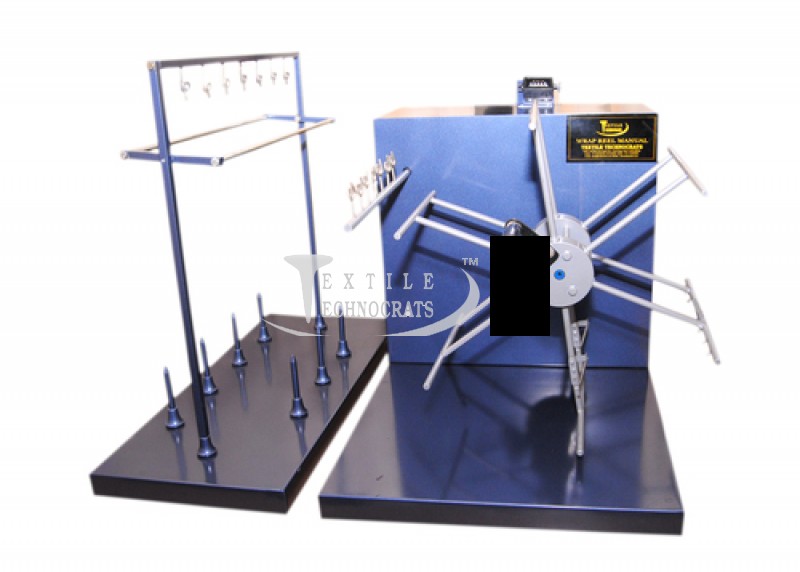 One of the methods for determining the count of yarn is by making a lea of standard circumference and number of turns and finding its weight, from which the tex or the count of the yarn can be determined.  The lea is usually made on a Wrap Reel, which may be either hand or motor operated.  These leas may be also be used for the determination of the strength of yarn (Lea strength), or for conducting certain chemical or colour fastness tests.  The leas may be either Imperial having a circumference of 54 inches and having 80 turns, or Metric having a circumference of one meter and having 100 turns.

The equipment is dispatched in fully assembled condition. In the Wrap Reel used to prepare leas of only one size the reel is fixed permanently over the rotating shaft of the Wrap Reel.

+ Place the bobbins from which the yarn is to be drawn on the guide pins on the left hand side of the equipment base plate.  Up to seven bobbins can be mounted at one time.  Draw yarn from the last bobbin and pass it over the horizontal guide rod and through the last pig-tail eye on the square aluminium rod.  Tie the free end of the yarn to the last screw on one of the arms of the reel.  Repeat the procedure to fix the yarn from the remaining bobbins to the corresponding screws.

+ The bobbin circle is separate from the main reel.

+ Raise the dockable arm of the reel to its highest position by turning the cam below it anti-clockwise.

+ Set the turns counter to zero.  Start rotating the reel clockwise to form the leas.  Continue rotating till the required number of turns is reached (80 for imperial leas or 100 for metric leas).

+ Unite the free ends of each of the leas in turn and tie them to the other ends of the same lea without either pulling the yarn too much or leaving a slack in it.  Cut the yarn at the bobbin side near the knot.

+ Lower the dockable arm by turning the cam clockwise.  This would loosen the leas and facilitate their removal from the reel.

+ Repeat the above procedure to obtain more leas if required.

Conduct the desired tests on the leas so formed following the steps outlined in the testing procedures for the tests to be carried out.  The leas may be conditioned before carrying out these tests, if so specified.