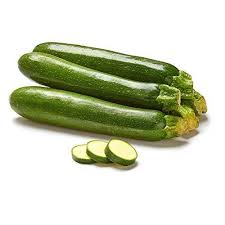 A Brief Introduction Zucchini or Courgette is a variety of summer squash with smooth and dark green skin. Its cylindrical shape resembles a cucumber. Along with some other squashes, it belongs to the species Cucurbita pepo. Courgette is the British, and particularly the New Zealand name for zucchinis. It can be yellow, green or light green, and generally has a similar shape to a ridged cucumber. However, certain cultivars can produce round or bottle-shaped fruit. This this oval squash-like gourd is also known by the name of “vegetable marrow, ” in some parts of the world. Like all summer squash, Zucchini also has its ancestry in the Americas.   The Americans and the Australians know this moderately long cylindrical summer squash by the name of Zucchini; whereas the Britons and the New Zea-landers know this green-skinned crop as courgette. Zucchini is perhaps the best known and most popular of the summer squashes. It can be steamed, grilled, sautéed, deep-fried, and baked. Zucchini is a member of the cucurbit family and is related to watermelons, gherkins and cucumbers. In a culinary context, zucchini is treated as a vegetable, which means it is usually cooked and presented as a savory dish or accompaniment. Botanically, however, the zucchini is an immature fruit, being the swollen ovary of the female zucchini flower.   Nutritional Value Being a good source of Vitamin A, Zucchini is regarded as a healthy food by the global dietitian fraternity. Low in calories, these cylindrical shaped fruits also contain a healthy supply of manganese, folate, and potassium. They’re often a great food if you’re dieting, since manganese is known for its ability to speed up the metabolism. Growing Zucchini Plant It is one of the easiest vegetables to cultivate in temperate climates. You do need to plant two plants since the squash depends upon cross-pollination by honeybees in order to fruit. A single plant is capable of growing an impressive amount of zucchinis.   Culinary Uses As a versatile vegetable, zucchini can be steamed, grilled, sautéed, deep-fried, and baked. Their fresh and delicate flavour make them perfect for various culinary purposes. Their slices are widely used into stews and soups. They performed extremely well when used in pasta sauce or in spicy zucchini bread or muffins. On a few occasions, they are used in preparing desserts. Additionally you can make zucchini pancakes that are savory, or use zucchini in lasagna. In Italy, zucchini are served in a variety of ways, especially breaded and pan-fried. In France zucchini is a key ingredient in Ratatouille, a stew of summer vegetables in olive oil, cooked for an extended time over low heat.

An Overview Broccoli is a plant of the cabbage family which is grown for its edible immature flower panicles. It is classified as the Italica cultivar group of the species brassica oleracea which also includes vegetables like cauliflower, cabbages, brussels sprouts, turnips and many other Asian greens. The word broccoli means ‘little sprouts’ in Italian. This unusual looking garden vegetable is widely cultivated in the entire temperate regions. Broccoli comprises of a number of green coloured fleshy flower heads, which are arranged in a tree-like fashion on branches sprouting from a thick, edible stalk. It was originated in the Eastern Mediterranean and Asia Minor region and was introduced to U.S. probably in colonial times. This cold climate crop is one of the most nutritious of all common vegetables.   Plant Description Broccoli prefers cold climatic conditions and perform best when temperatures remain between 40 degrees and 70 degrees F. (18-23 degrees celsius) during the growing period. This crop of the brassicaceae family does poorly in hot summer weather; and temperatures below 32°F for periods of 36 hours have killed broccoli plants. As far as the soil is concerned, it requires a well drained and fertile soil with 5.7-6.5 pH. The edible part of the broccoli plant is a tender stem and unopened flower buds. Morphologically both the cauliflower and broccoli are similar, but the latter produces a green head with longer and more slender floret stalks than cauliflower. Since it is a fast growing succulent plant, it requires even soil moisture. On an average, it requires 1 to 1 ½ inches of water a week.   Broccoli is the best example of a fractal pattern vegetable, having a growing a spiral head composed of conical florets which also prove to be spirals upon close examination. Interestingly mathematicians sometimes use this plant to explain the concept of fractals, since it is stunning to look at. The vegetable has a greenish tinge, and giant waxy leaves which can almost entirely conceal the edible heads of the plant. Nutritional Value Broccoli contains higher concentrations of minerals and vitamins. Its lower cholesterol level and saturated fats make it a perfectly nutritious diet. Besides maintaining optimum health, it is also helpful in shedding extra calories. It contains higher concentrations of Dietary Fiber, Vitamin A, Vitamin C, Vitamin K, Vitamin B6, Folate, Potassium, Manganese, Protein, Vitamin E, Thiamin, Riboflavin, Pantothenic Acid, Calcium, Iron, Magnesium, Phosphorus and Selenium.   Shasta Daisy (leucanthemum superbum) Formerly known as Chrysanthemum maximum, Shasta Daisy produces many beautiful flowers with white petals and distinctively marked yellow center. Broccoli Salad Almond with Broccoli Bacon and Broccoli Salad Baked Broccoli Frittata Broccoli with Garlic Sauce Broccoli Casserole Broccoli Cheese Soup Broccoli Gratin Broccoli in Oyster Sauce Broccoli Quiche Broccoli Rice Casserole Broccoli Slaw Chicken and Broccoli.