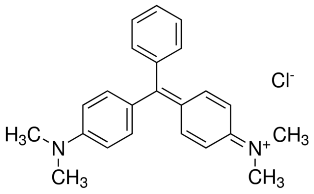 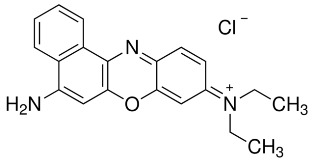 Nile blue chloride has been used to stain non-aqueous phase in fluorescence microscopy studies. Biochem/physiol Actions. Nile blue chloride is a green colored powder and is a member of oxazine group of dyes. It changes its color from blue (pH 9.4) to purple-red (11.0).

Nile Blue chloride, or Nile Blue A, is a fluorescence reference standard used for various histologic staining. It is commonly utilized in studies involved with lipid and nuclei staining. Nile Blue chloride imparts a pink color to unsaturated glycerides and neutral lipids and stains nuclei and acids (such as fatty acids, chormolipids and phospholipids) a purple-blue color.

Hydroxy naphthol blue disodium salt is a synthetic dye that has been used as a calcium indicator, which has a ?max = 650 nm. In the pH range between 12 and 13, the solution of the indicator is reddish pink in the presence of calcium ion and deep blue in the presence of excess (Ethylenedinitrilo)tetraacetate. It is used as Laboratory reagent as approx. 3% dispersion in NaCl solution for determination of calcium.

When hydroxynaphthol blue dye (HNB) was added prior to amplification, samples with DNA of the F167Y mutation developed a characteristic sky blue color after the reaction but those without DNA or with different DNA did not. Results of HNB staining method were reconfirmed by gel electrophoresis. The traditional diagnostic method for Pseudorabies virus (PRV) has the defect of cumbersome procedures, long period, high cost and poor specificity. Thus we built a sensitive and specific loop-mediated isothermal amplification (LAMP) method for the detection of PRV, and used hydroxy naphthol blue (HNB) as indicator to judge the reaction result. The highly conserved gB (glycoprotein B) gene was selected to design primers. The detection could be finished within 45 min after the reaction system was established. Both LAMP and PCR were highly specific to PRV, but he LAMP-based assay, whose detection limit was 102 copies of the target sequence, was 10 times more sensitive than that of the PCR assay. In HNB test, when the ultimate concentration of HNB was 150 µmol/L, the color contrast of the LAMP products between positive samples and negative control was obvious and the sensisity of LAMP reaction was the best.The detection of clinical samples showed that the LAMP reaction had the similar detection rate with the PCR assay. In this experiment, the LAMP method is a highly specific and sensitive detection technology, which can be used instead of traditional PCR method. 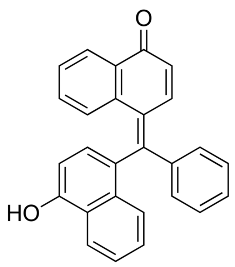 A 0, 2% w/v solution of 1-naphtholbenzein in anhydrous glacial acetic acid complies the following test. Add 0, 25ml to 50ml of anhydrous glavcial acetic acid. Not more than 0, 05ml of 0.1M perchloric acid is required to change the color of the solution from brownish yellow to green.