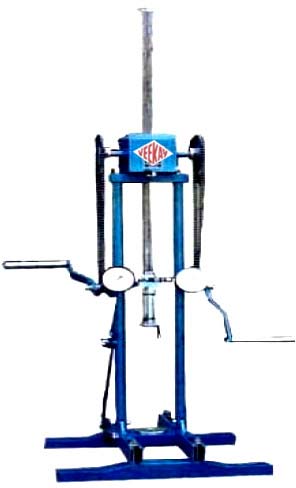 We provide Static Cone Penetrometer which is a hand operated Cone Penetrometer. Our Static Cone Penetrometer operates by manually through a gearing arrangement. We make sure that our product can be conveniently operated. Best feature of our Static Cone Penetrometer is that the gear box and pinion are fixed on two handles, sprockets and chain arrangement. It is made sure that the movement of the rack is guided by a bracket (attached to the rack) and two pillars. Another main feature of our Static Cone Penetrometer is its penetration resistance which is indicated on hydraulic gauges through a hydraulic measuring head. Components Penetration Cone, steel 60 angle 10cm base area with friction jacket One Mantle Tube, non-uniform , 36mm OD at the two ends and reduced dia in between with sounding rod working length 1m-fifteen Load Measuring Head, with Automatic Cut off valve and Oil Can, without Pressure Gauge One 2 Pressure Gauge, 0-60kgcm One 2 Pressure Gauge, 0-160kgcm One Screw Anchor, with Bolt Four Anchor Driving Handle One Rod One Spanner One Extension Pipe 0.5m long Two pressure gauges of 15cm dia dial and 2 capacities 0-160kgcm are provided An automatic cut-off valve, to protect the low capacity gauge from being overloaded is provided The 2 valve can be adjusted and locked at desirable values between 20 to 60cm A provision is made to anchor the unit to the ground (with the help of four anchors supplied with the unit) and there is a provision for lateral 2 movement of the unit so that subsequent tests could be performed without shifting the entire anchorage A 10cm penetration cone with friction jacket is provided along with fifteen mantle tubes (non-uniform having an effective length of 1 m each with sounding rods for finding out the cone (point) resistance or jacket friction 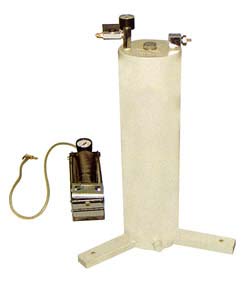 We are a well-known Manufacturer, Exporter and Supplier of Lateral Pressure Assembly . The Lateral Pressure Assembly manufactured by our company is known for its superior making as well as the numerous attractive features. The Lateral Pressure Assembly is one of the utility products in the modern times. Features Durable and long-lasting Simple and accurate operations Excellent performance Resistant to wear and tear High quality product Available at affordable prices Compact fitting of the components at the time of assembly Specifications The apparatus consists of a pressure chamber which has a flanged top 2 cap fitted with a 10 kgcm Pressure gauge and a valve for pumping in air Water inlet and drain cock are fitted to the chamber The foot pump supplied easily develops a pressure of 10 kgcm 2 Complete with connecting pressure hose Note : Capacity 20kgcm 2 Also available 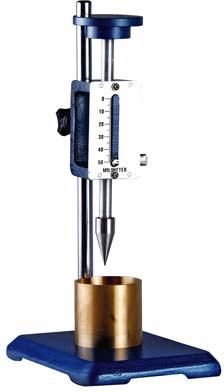 Plummet Balance , which is provided by our manufacturing unit, is known to be made by adhering to strict quality and industrial standards. The Plummet Balance method is used for analyzing the size of sub sieve particle in a range, which is highly rapid. The Plummer Balance, provided by our manufacturing unit is known for sinking to specified depths and giving the reader accurate readings. Specifications Conventionally particle size distribution analysis is carried out using pipette and hydrometer methods. Whereas in hydrometer method it is possible to determine particle sizes in the range 75microns, the method involves computation and it is time consuming. The pipette method can be used for determining only the percentage of specific sizes less than 0.02, 0.006 and 0.002mm as a percentage of total soil sample. The percentage of soil in suspension is directly indicated by a pointer over a graduated scale. A vertical rod is mounted on a sturdy base having leveling screws. A pointer with steel pivots turns is jewel bearing an moves over a graduated scale. Scale graduations are market 0-100% x 2% To the other end of the pointer a plummet is hanged. Rack and pinion arrangement is provided on the vertical rod for adjusting the height. Supplied with a chart showing relationship between “K” and temperature of suspension of soils of varying specific gravity from 2.4 to 2.8 to help in solving stroke's equation. Supplied complete with one Perspex plummet one measuring jar and one rider weight for zero adjustment and rider weight for adjusting the pointer to 100%. Features Of Plummet Balance The Plummet Balance manufactured by us complies to the standard- ASTM D 2419, AASHTO T 176 It is durable Discounted rate

The Semi Automatic Cone Penetrometer that we provide are of utmost use for determination of the moisture content at which clay soils pass from a plastic to a liquid state. We make available two versions of Semi Automatic Cone Penetrometer. It features a timer, where the cone is allowed to free fall for a period of 5 seconds, including one each of 50 gm. & 100 gm. weight, one penetration cone, preset counter & measuring cup.

Our company is a reputed Manufacturer of the Mortar Cone Penetrometer . The Mortar Cone Penetrometers produced by our company are very important Concrete Testing Equipments and they are widely demanded. We produce high-quality Mortar Cone Penetrometer with many attractive features. Regerence Standard - IS 2250-1965 For determining the consistency of masonry mortar Consists of a movable bearing rod to which a cone 145mm. Long and 75mm diameter at a base is fixed. The bearing rod passes freely through a bracket which is provided with release mechanism. A diameter graduated in mm with rack and pinion is provided for measuring the penetration. Complete with a conical container 150mm id x 180mm deep and a platform.

Universal Automatic Compactor that we make available is a motor driven mechanical compactor. It proves to be most beneficial for soil compaction into 100mm to 102 mm and 150mm to 152.4 mm diameter moulds. Specifications Two sets of Rammers are provided, one of 2.5 kg and arranged for 300 mm & 305 mm drop and other 4.5 kg and arranged for 450 mm & 457 mm drop The rammer assembly is provided with a ratchet and pawl arrangement to lift it from the top of the soil layer When the rammer reaches the required height the pawl release the rammer which falls freely on soil surface The release mechanism is operated by an arm moving up and down which is connected to a reduction gear coupled to the motor through another arm An automatic blow counter fitted to the compactor is used to set the number of blows The base plate of the specimen mould is to be fitted to the rotating base plate of the instrument which marks 15” revolution per stroke The equipment is suitable for operation on 230 V, 50 Cycles, Single Phase, A.C. supply moulds are to be ordered separately

We are one of the well-known Manufacturers, Exporters and Suppliers of the Soil Sampling Augers . The Soil Sampling Augers manufactured by our company are widely trusted for their high quality and efficient operations. We use the latest manufacturing techniques for making sure that the Soil Sampling Augers are free of any aspersions regarding the quality. Types BladePosthole Type Augers Helicalscrew Type Augers Parts of the Soil Sampling Augers Auger head One meter long rod Tee piece Handle Extra equipment in the form of extension rod with both ends threaded and a set of two spanners, tee piece and a coupling Applications Used for collecting disturbed soil samples Used in excavations VK-01 Auger Posthole Type 50mm 75mm 100mm diameter 150mm diameter VK-02 Auger Screw Type 25mm 38mm 50mm 75mm 100mm 150mm 200mm 250mm 300mm diameter Extras : Extension rod 1 meter length with threading at both ends and couplings, set of two spanners and tee piece.