Thin film or wiped film evaporators are used to separate a mixture of liquids having different boiling points. It is also used to increase the concentration of liquids.The liquid feed is distributed on the heated wall of the evaporator to form a uniform thin film with the help of suitable configuration of blades. The volatile component or the component with lower boiling point gets evaporated and is vacuumed out of the evaporator, while the component with higher boiling point flows down the wall and is collected at the bottom. The vapours are passed through a condenser and collected separately.

Forced circulation evaporators are most suited for the liquids which tend to crystallize upon concentration and which have tendency to scale.Evaporators in which circulation is maintained, regardless of evaporation rate or heat duty, by pumping the liquid through the heating element with relatively low evaporation per pass are suitable for a wide variety of applications. 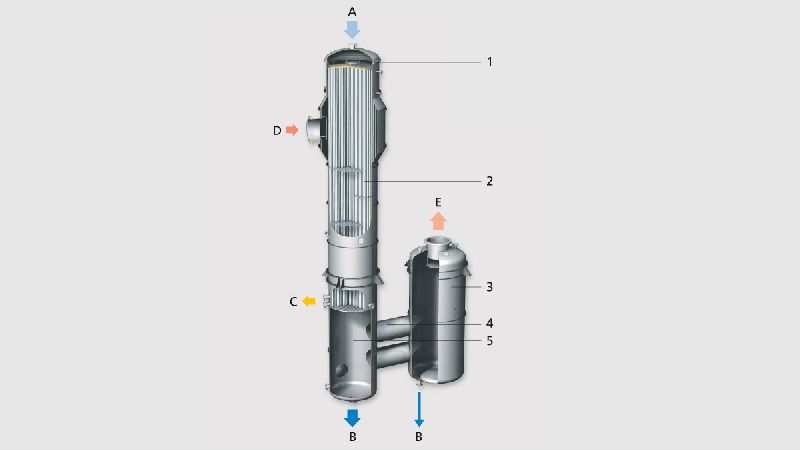 In falling film evaporators the liquid product usually enters the evaporator at the head of the evaporator. The product is evenly distributed into the heating tubes. A thin film enters the heating tube and it flows downwards at boiling temperature and is partially evaporated. In most cases steam is used for heating the evaporator. The product and the vapor both flow downwards in a parallel flow. This gravity-induced downward movement is increasingly augmented by the co-current vapor flow. The separation of the concentrated product from its vapor is undergoing in the lower part of the heat exchanger and the separator.Falling film evaporators can be operated with very low temperature differences between the heating media and the boiling liquid, and they also have very short product contact times, typically just a few seconds per pass. These characteristics make the falling film evaporator particularly suitable for heat-sensitive products, and it is today the most frequently used type of evaporator.