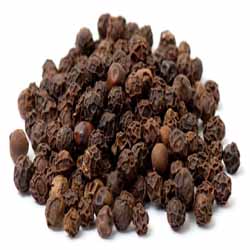 Black pepper  is the fruit of the black pepper plant from the  Piperaceae  family and is used as both a spice and a medicine. The chemical piperine, which is present in black pepper, causes the spiciness. It is native to Kerala, the southern state of India. Since ancient times, black pepper is one of the most widely traded spices in the world. It is not considered a seasonal plant and is therefore available throughout the year. When dried, this plant-derived spice is referred to as a peppercorn, and is then ground into a powder to be put on food to add flavor and spice.   Because of its antibacterial properties, pepper is also used to preserve food. It is a rich source of manganese, iron, potassium, vitamin-C, vitamin K, and dietary fiber. Black pepper is also a very good anti-inflammatory agent.Health Benefits of Black Pepper are, Good for the Stomach Weight Loss Skin Health Respiratory Relief Antibacterial Quality Antioxidant Potential Enhances Bioavailability Cognitive Impairment and Neurological Health Peptic Ulcers Asthma and Whooping Cough 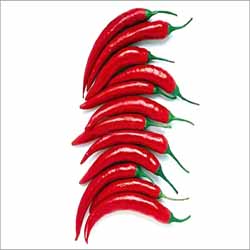 Chili peppers , despite their fiery “hotness”, are one of very popular spices known for their medicinal and health benefiting properties. The chili, actually, is a fruit pod from the plant belonging to the nightshade family ( Solanaceae) , within the genus,   capsicum .   Scientific name:  Capsicum annum.  Some of other common members in the Solanaceae family are tomato, aubergine , potato , etc. The chili plant is native to Central American region where it was employed as one the chief spice ingredients in Mexican cuisine for centuries. It was later introduced to the rest of the world by Spanish and Portuguese explorers during 16th and 17th centuries, and today grown widely in many parts of the world as an important commercial crop. Several cultivars of chili peppers are grown all around the world.  Chili plant  is a small, perennial shrub with woody stem, growing up to a meter in height. It bears white flowers which subsequently develop into fruit pods of variable size, shape, color, and pungency. Depending on the cultivar type, their hotness ranges from mild, fleshy (Mexican bell peppers) to fiery, tiny,   Nag Jalokiya  chili peppers of Indian subcontinent. The hotness of chili is measured in “Scoville heat units” (SHU). On the Scoville scale, a sweet bell pepper scores 0, a jalapeño pepper around 2, 500-4, 000 units, and a Mexican habañeros may have 200, 000 to 500, 000 units. Inside, each fruit features numerous tiny, white, or cream colored, circular, flat seeds which clinging around the central white-placenta. To harvest, chilies can be picked up while they are green, or when they reach complete maturity and dry on the plant itself. In general, the fruits are ready for harvesting once they mature and turn red. They are then left to dry under sun and srink in size. Chilies have a strong spicy taste that comes to them from the active compounds:  capsaicin, capsanthin  and  capsorubin .Health benefits of chili peppers Chili pepper contains an impressive list of plant derived chemical compounds that are known to have disease preventing and health promoting properties. Chilies contain health benefiting an compound in them,   capsaicin,  which gives them strong spicy pungent character. Fresh chili peppers, red and green, are rich source of  vitamin-C.  100 g fresh chilies provide about  7 µg or about 240% of RDA. They are also good in other antioxidants such as vitamin-A, and flavonoids like  ß-carotene, α-carotene, lutein, zea-xanthin, and cryptoxanthin . Chilies contain a good amount of minerals like potassium, manganese, iron, and magnesium. Chilies are also good in B-complex group of vitamins such as niacin, pyridoxine (vitamin B-6), riboflavin and thiamin (vitamin B-1). These vitamins are essential in the sense that human body requires them from external sources to replenish. 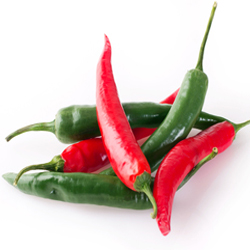 bird’s eye chilli  They belong to the species Capsicum annuum, commonly found in Southeast Asia. Bird’s eye chilli can also be found in India, in Meghalaya and Kerala where it is used in traditional dishes. It is also a main ingredient in kochchisambal, a salad made using freshly scraped coconut ground with bird’s eye chillies and seasoned with salt and lemon juice. It is used extensively in Thai, Lao, Khmer, Indonesian, and Vietnamese cuisine too. How spicy are they ?Measuring 50, 000-100, 000 scovilles, this tiny chilli originated in Cambodia, Vietnam, Thailand, The Philippines, and surrounding countries, but they can now be found all over the world. They are presumably called Bird’s Eye Chilli because of their small round shape and because they have been spread by birds. The Bird’s Eye is generally red at maturity, but may also be yellow, purple or black. They are very popular in cuisine from the areas mentioned above, and they add quite a punch to many types of dishes, including pastas, soups, sauces, dips, and more. Health benefits of these chillies Historically, they have been used as a natural remedy for arthritis, rheumatism, flatulence and toothache. Recent studies prove that by consuming just a little chilli (fresh or dried) daily, can help get better sleep and also sleep longer. And adding a little fresh-cut chilli to your evening meal may also help you feel more awake the next day. Studies also show that by regularly consuming chillies, your heart will be healthy since it helps lower cholesterol thus keeping your blood pressure in a healthy range, and allows more blood to reach the heart. 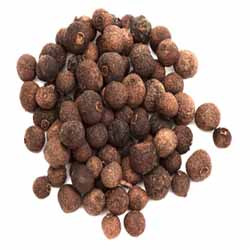 Jamaican pepper  or  pimento,  is one of the widely used spice in the Mexican and other Central American cuisines. This spice corn actually is a dried “unripe” fruit obtained from an evergreen tropical shrub belonging to the  Myrtaceae  family, in the genus:  pimento . Scientific name:  Pimenta dioica.   The pimento tree is native to tropical evergreen rain forest of Central American region and Caribbean islands. Generally, the plant starts bearing fruits after about five years of implantation. Unripe green berries, generally, picked up from the tree when they reach full size. The corns are then subjected to dry under sunlight thoroughly. Thus shriveled berries which appear similar to that of brown peppercorns, measure about 6 mm in diameter but contain two seeds unlike peppercorns, which have only one centrally placed seed. Ground allspice has strong spicy taste and aroma that closely resemble a mixture of black-pepper, nutmeg, cloves, and cinnamon.. Health benefits of Allspice The active principles in the allspice have been found to have anti-inflammatory,   rubefacient  (warming and soothing), carminative, and anti-flatulent properties. Allspice corns contains health benefiting essential oils such as  eugenol ,  a phenylpropanoids class of chemical compound, which gives pleasant, sweet aromatic fragrances to this spice. It also contains  caryophyllene, methyleugenol, glycosides, tannins, quercetin, resin,   and At the processing units, these volatile essential oils are obtained through distillation process using this spice corn. The outer coat of the allspice-berries is believed to have the greatest concentration of some of the compounds of medicinal activities. As in black peppercorns, the active principles in the allspice may increase the motility of the gastro-intestinal tract in addition to aid in digestion through facilitating enzyme secretions inside the stomach and intestines. Eugenol,  has local anesthetic and antiseptic properties. It found useful in gum and dental treatment procedures. Recent research studies have shown that the preparation made from allspice oil mixed with extractions from garlic, and oregano can work against E.coli, Salmonella and L.monocytogenes infections. The spice is enriched with good amount of minerals like potassium, manganese, iron, copper, selenium, and magnesium. Iron is an important co-factor for cytochrome-oxidase enzymes during cellular metabolism. It is also required for red blood cell production inside the bone marrow. Being an important component of cell and body fluids, potassium helps control heart rate and blood pressure. Manganese is utilized inside the human body as a co-factor for the antioxidant enzyme, superoxide dismutase. Further, this spice also carries a very good amount of vitamin A, vitamin B-6 (pyridoxine), riboflavin, niacin and vitamin-C. Vitamin C is a powerful natural antioxidant; regular consumption of foods rich in vitamin C helps the body develop resistance against infectious agents and scavenge harmful, pro-inflammatory free radicals.