A dried seed that comes from the fennel herb, fennel seeds look like cumin seeds, only greener, and have an aniseed flavour and a warm, sweet aroma. They're also used in spice mixes such as Chinese five spice and the Indian panch poran. Fennel seeds come from the green fennel plant and have a pungent, spicy, aniselike flavor. Many recipes, including recipes for Chinese and Indian dishes, call for ground fennel seed as a spice. You can purchase fennel seeds that have already been ground or grind your own fennel seeds at home to save money and make just as much ground fennel as you need.

This spice is used as a digestive aid, in food as a condiment, and in pickle. It typically works as a flavour enhancer and, used along with turmeric, is a standard component of Indian cuisine, particularly in lentil curries, such as dal as well as in numerous vegetable dishes. It is especially widely used in South Indian and Maharashtrian cuisine, which is mainly vegetarian, and is often used to harmonize sweet, sour, salty and spicy components in food. Asafoetida also serves the purpose as a vegetarian alternative to make food taste more full-flavoured and savoury. The spice is added to the food at the time of tempering. Sometimes dried and ground asafoetida (in very mild quantity) can be mixed with salt and eaten with raw salad. In its pure form, its odour is so strong the aroma will contaminate other spices stored nearby if it is not stored in an airtight container: many commercial preparations of asafoetida utilize the resin ground up and mixed with a larger volume of wheat flour: the mixture is sold in sealed plastic containers with a small hole at the bottom, allowing the diluted spice to be dusted lightly over the food being cooked. However, its odour and flavour become much milder and more pleasant upon heating in oil or ghee, acquiring a taste and aroma reminiscent of sautéed onion and garlic. It is used especially by the merchant caste of the Hindus and by adherents of Jainism and Vaishnavism, particularly in Rajasthan, Gujarat, Karnataka and Maharashtra, who do not eat onions or garlic. It is used in many vegetarian and lentil dishes to add both flavour and aroma as well as to reduce flatulence. It is however one of the pungent vegetables generally avoided by Buddhist vegetarians. 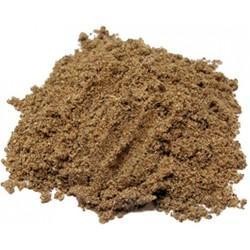 Cubeb is mostly grown in Java and Sumatra, hence sometimes called Java pepper. Dried cubeb berries are similar in appearance to black pepper, but with stalks attached - the "tails" in "tailed pepper". Because of its aromatic qualities, cubeb goes well with meat, cheese and vegetable dishes. It may be substituted for pepper in spice mixtures flavouring patés, sausages, gingerbreads and spiced biscuits. In taste it has been described as tasting like allspice (pimento), or like a cross between allspice and black pepper. As with other pepper, grind as necessary; ground pepper rapidly loses its aroma. Cubeb has been shown to be effective in easing the symptoms of chronic bronchitis. It is also used for digestive ailments and is effective in treating dysentery. Cubeb also has a local stimulating effect on the mucous membranes of the urinary and respiratory tracts.