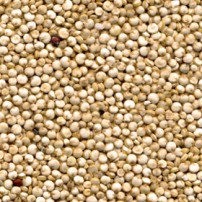 Whole oat kernels are steamed, flattened through rollers, and flaked, to retain most of their nutrition to become quick cooking oats. Oat flakes are white to golden in color and are used in cereals, baking and processing into muesli. They can be eaten cold as in muesli cooked as in an oat porridge or used as an ingredient in baked goods. Oats are an excellent source of iron and dietary fiber.