We offer the best product range of Cardamom and Turmeric Powder. 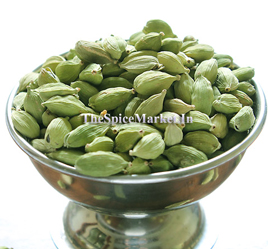 Cardamom is one of the world’s very ancient spices. It is native to the East originating in the forests of the western ghats in southern India, where it grows wild. Today it also grows in Sri Lanka, Guatemala, Indo China and Tanzania. The ancient Egyptians chewed cardamom seeds as a tooth cleaner; the Greeks and Romans used it as a perfume. Vikings came upon cardamom about one thousand years ago, in Constantinople, and introduced it into Scandinavia, where it remains popular to this day. Indian cardamom is known in two main varieties: Malabar cardamom and Mysore cardamom. The Mysore variety contains higher levels of cineol and limonene and hence is more aromatic Cardamom comes from the seeds of a ginger-like plant. The pods can be used whole or split when cooked in Indian substantial meals — such as pulses. Otherwise, the seeds can be bruised and fried before adding main ingredients to the pan, or pounded with other spices as required. Keep the pods whole until use. The pod itself is neutral in flavour and not generally used, imparting an unpleasant bitter flavour when left in dishes. A stimulant and carminative, cardamom is not used in Western medicine for it own properties, but forms a flavoring and basis for medicinal preparations for indigestion and flatulence using other substances, entering into a synergetic relationship with them. The Arabs attributed aphrodisiac qualities to it (it features regularly in the Arabian Nights) and the ancient Indians regarded it as a cure for obesity. It has been used as a digestive since ancient times. A medicinal (perhaps aphrodisiac) cordial can be made by macerating seeds in hot water.

Turmeric is an ancient spice, a native of South East Asia, used from antiquity as dye and a condiment. It is cultivated primarily in Bengal, China, Taiwan, Sri Lanka, Java. Peru. Australia and the West Indies. It is still used in rituals of the Hindu religion, and as a dye for holy robes, being natural, unsynthesized and cheap. Turmeric is in fact one of the cheapest spices. Although as a dye it is used similarly to saffron, the culinary uses of the two spices should not be confused and should never replace saffron in food dishes. Its use dates back nearly 4000 years, to the Vedic culture in India where it was used as a culinary spice and had some religious significance. The name derives from the Latin terra merita “meritorious earth” referring to the colour of ground turmeric which resembles a mineral pigment. In many languages turmeric is simply named as “yellow root”. Turmeric is the rhizome or underground stem of a ginger-like plant. It is usually available ground, as a bright yellow, fine powder. The whole turmeric is a tuberous rhizome, with a rough, segmented skin. The rhizome is yellowish-brown with a dull orange interior that looks bright yellow when powdered. The main rhizome measures 2.5 – 7 cm (1” – 3 “) in length with a diameter of 2.5 cm (1”), with smaller tubers branching off. Turmeric is always used in ground form. The powder will maintain its colouring properties indefinitely though the flavour will diminish over time so buy in moderation. Store in airtight containers, out of sunlight. Turmeric is used extensively in the East and Middle East as a condiment and culinary dye. In India it is used to tint many sweet dishes. Apart from its wide use in Moroccan cuisine to spice meat, particularly lamb, and vegetables, its principal place is in curries and curry powders. It is used in many fish curries, possibly because it successfully masks fishy odours. When used in curry powders, it is usually one of the main ingredients, providing the associated yellow colour. Turmeric is a mild digestive, being aromatic, a stimulant and a carminative. An ointment base on the spice is used as an antiseptic in Malaysia. Turmeric water is an Asian cosmetic applied to impart a golden glow to the complexion. Curcumin has been shown to be active against Staphlococcus aureus (pus-producing infections)