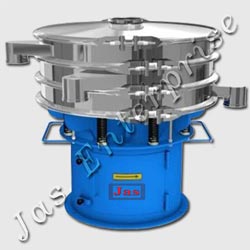 The material to be screened is fed on to the center of top screen. The undersize material passes rapidly though the screen during its travel to the periphery. The oversize material is continuously discharged through a tangential outlet. Vibro sifters are equipped to handle multiple screens one on top of the other with feed trays in between to give several precise sized fractions in a single screening operation. Special designs with up to seven screens are also available for grading. The top weight on the motor shaft rotates in a plane close to the center of mass of the assembly. Rotation of the top eccentric weights creates vibration in the horizontal plane which causes the material to move across the screen cloth to the periphery. Increasing the top eccentric mass increases the horizontal throw causing oversize material to discharge at a faster rate. The bottom eccentric weights rotate below the center of the vibrating mass creating tilt on the screens giving vibration in vertical and tangential planes. Increasing the vertical component of motion promotes turnover of material on the screen surface helping maximum quantity of undersize material to pass through the screen. The effective vertical motion helps in minimizing blinding of screen. The tangential component of motion is controlled by the angle of lead given to bottom weights with relation to top weights. Variation in lead angle controls the spiral pattern of material travel over the screen cloth. Speed and flow pattern of material travel over the screen cloth can be set by the operator for maximum through-put and screening efficiency. Typical material travel patterns generated at various lead angles are shown below.