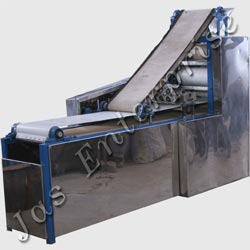 The entire population of India loves chaat food. Chaat food is popular because of it tingling taste. Assorted items along with sweet, sour and hot sauces used according to a person's willingness. Thus it becomes special. In chaat item Pani Puri has its own class. Fully puffed to a ball shape deep fried pastries filed with minted and spiced, hot and sour and sweet chutney (sweet chutney is added if only wanted) also mashed boiled potatoes sprouted beans or boiled dried mutter with chaat masala is also added and then eaten, wholes purl at a time. This item is specialty of uttar-pradesh (north India) but it sprayed quickly around country very quickly then around the world with Indian population. In Delhi Pani Puri is known as golguppa. In Kolkata it is popular as pichka. In Gujarat they recognize it as pakodi. Mumbai people's favorite name for this item is Pani Puri. This pani puri making machine is also use for multipurpose also for farshi puri, khichiya papad , raw chapati, raw khakhara, farsi puri, mathi puri, sakkarpara, chat papadi, mathri, stick, puri, samosa (a triangular fried pastry containing spiced vegetables or meat.), nachos (a small piece of tortilla topped with melted cheese, peppers, etc. ), tortilla (a thin, flat maize pancake, typically eaten with a savory filling.) , dumpling, ravioli, pita bread, etc. This is prepared from maida, Pani Puri (gol gappa) making machine.   Process of Pani Puri making machine This Pani Puri plant for making of Pani Puri, being a semi- automatic plant, would involve processes right from the mixing of ingredients to collection of ready-to-fry Pani Puri at the collection end. Dough Kneader (floor kneading machine): This machine would consist of heavy-duty stainless steel body with multi-purpose arms. Heavy-duty gears are providing to take the full load and to avoid damage to the mixer arms. Dough Sheeter: Sheeter consisting of a heavy- duty frame with gauging rollers driven by a motor with gearbox arrangement would be provided. The hopper would be of stainless steel with proper taper. The dough is smooth formed from the hopper in the form of a sheet and feed to the gauging rollers. The distance between the gauging rollers would be adjustable and this would depend on the desired thickness of the Pani Puri, khichiya papad, nachos, tortilla, mathri, mathi puri, raw khakhara. The rollers would be polytetrafluoroethylene (Teflon) coated (food-grade material). There would be an intermediate conveyor to feed the dough sheet to the cutting plant. The conveyor belt would be of food-grade material. Rotary cutting unit: A rotary cutting is would be fitted on a roller for smooth and accurate cutting pani-puri as per the desired size. There would be a provision for shifting the generated Pani Puri scrap back to the hopper.