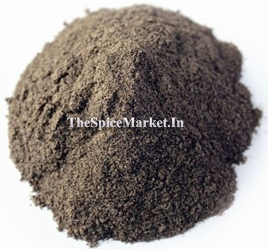 Black Pepper Powder (Kali mirch), Buy(order) Pepper Powder Online from The Spice Market, Whole Sale Price at Online Retail Shop We Ship All Over India Black pepper (Piper nigrum) is a flowering vine in the family Piperaceae, cultivated for its fruit, which is usually dried and used as a spice and seasoning. The fruit, known as a peppercorn when dried, is approximately 5 millimetres (0.20 in) in diameter, dark red when fully mature, and, like all drupes, contains a single seed. Peppercorns, and the ground pepper derived from them, may be described simply as pepper, or more precisely as black pepper (cooked and dried unripe fruit), green pepper (dried unripe fruit) and white pepper (ripe fruit seeds). Black pepper is native to south India, and is extensively cultivated there and elsewhere in tropical regions. Currently Vietnam is the world's largest producer and exporter of pepper, producing 34% of the world's Piper nigrum crop as of 2008. Dried ground pepper has been used since antiquity for both its flavour and as a traditional medicine. Black pepper is the world's most traded spice. It is one of the most common spices added to European cuisine and its descendants. The spiciness of black pepper is due to the chemical piperine, not to be confused with the capsaicin that gives fleshy peppers theirs. It is ubiquitous in the modern world as a seasoning, and is often paired with salt. Pepper is largely used by meat packers and in canning, pickling, baking, considering for its preservative value. It has the ability to correct the seasoning of dishes, therefore used as a final dash at the end of cooking to effectively adjust the flavour. It is an important component of culinary seasoning of universal use and is an essential ingredient of numerous commercial foodstuffs. It is also used as an ingredient in spice mixes. White pepper is used in products like mayonnaise where, black specks of black pepper is not liked.