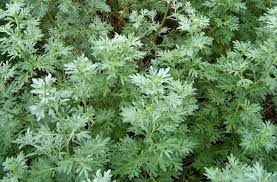 Artemisia absinthium (absinthe, absinthium, absinthe wormwood, wormwood[4]) is a species of Artemisia, native to temperateregions of Eurasia[5] and Northern Africa and widely naturalized in Canada and the northern United States.[6] It is grown as an ornamental plant and is used as an ingredient in the spirit absinthe as well as some other alcoholic drinks. Artemisia absinthium is a herbaceous, perennial plant with fibrous roots. The stems are straight, growing to 0.8Ă˘€“1.2 metres (2 ft 7 inĂ˘€“3 ft 11 in) (rarely 1.5 m, but, sometimes even larger) tall, grooved, branched, and silvery-green. The leaves are spirally arranged, greenish-grey above and white below, covered with silky silvery-white trichomes, and bearing minute oil-producing glands; the basal leaves are up to 25 cm long, bipinnate to tripinnate with long petioles, with the cauline leaves (those on the stem) smaller, 5Ă˘€“10 cm long, less divided, and with short petioles; the uppermost leaves can be both simple and sessile (without a petiole). Its flowers are pale yellow, tubular, and clustered in spherical bent-down heads (capitula), which are in turn clustered in leafy and branched panicles. Flowering is from early summer to early autumn; pollination is anemophilous. The fruit is a small achene; seed dispersal is by gravity.[6] It grows naturally on uncultivated, arid ground, on rocky slopes, and at the edge of footpaths and fields.