We offer the best product range of and prune. 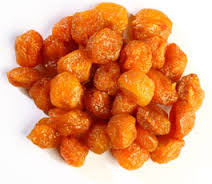 A prune is a dried plum of any cultivar, [1] mostly Prunus domestica or European Plum. The use of the term for fresh fruit is obsolete except when applied to varieties grown for drying.[1] Most prunes are freestone cultivars (the pit is easy to remove), whereas most other plums grown for fresh consumption are clingstone (the pit is more difficult to remove). Prunes are used in cooking both sweet and savory dishes Prunes and their juice contain mild laxatives including phenolic compounds (mainly as neochlorogenic acids and chlorogenic acids) and sorbitol.[6] Prunes also contain dietary fiber (about 7%, or 0.07 g per gram of prune). Prunes and prune juice are thus common home remedies for constipation, but a 2010 review (by the European Food Safety Authority (EFSA) found that the evidence was "insufficient to establish a cause and effect relationship between the consumption of dried plums of "prune" cultivars (Prunus domestica L.) and maintenance of normal bowel function".[7] A 2012 review by the same body, however, reversed this decision and proposed that prunes did effectively contribute to the restoration of normal bowel function in the general population if consumed in quantities of at least 100g per day (approximately 3-4oz). Prunes also have a high antioxidant content